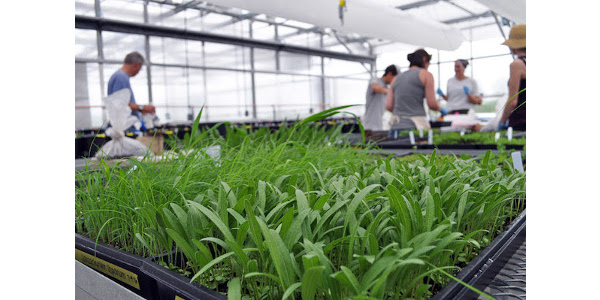 Researchers isolate native fungi from unplowed prairies and transport them to a greenhouse for testing in pot experiments as well as the field inoculation studies at the Gorrill Farmstead. (Courtesy of University of Kansas)

LAWRENCE, Kan. — Consider the humble soil just below our feet. It’s actually an intricate matrix of minerals, water, air, living organisms and decomposing organic material that supports every living thing on Earth. One vital part of this mix is microscopic fungi that have sustained plant life ever since there have been plants on the land.

For agriculture, a healthy balance of these fungi is essential to crop productivity. But industrial farming methods — like use of pesticides, fertilizers and routine tilling of the soil — upset the balance of fungi, degrade soil quality and trigger erosion.

Now, a research collaboration between scientists at the Kansas Biological Survey at the University of Kansas and The Land Institute aims restore fungi historically tied with native tallgrass prairie — all in hopes of making farming viable for the long-term future.

“The Land Institute is dedicated to the creation of agriculture in the image of the sustainable prairie,” said James Bever, senior scientist with the Biological Survey and distinguished foundation professor in ecology and evolutionary biology at KU, who is leading the effort. “Part of that is the generation of perennial crops which can yield grains productively without continual plowing of the land, which should reduce erosion problems.”

With a pair of two-year grants together amounting to more than $300,000, Bever, joins Ben Sikes of EEB and the Biological Survey and Tim Crews of The Land Institute to lead a research team including Liz Koziol and Tom McKenna of KU. The investigators use greenhouse studies and the Land Institute’s Gorrill Farmstead near Lawrence to inoculate plants with varying densities of native fungi extracted from native prairie.

Rather than planting annual crops that require chemicals and intensive working of the soil, the Land Institute aims to develop perennial cousins of staple crops that will regrow year after year from more extensive root systems associated with soil fungi. These fungi form a mutually beneficial system with plants, partly by developing fine filaments called hyphae that stabilize soil, connect plants to soil nutrients and act as an extension of the plants’ own root systems.

“The plants fix carbon from the atmosphere and make them into sugars and trade them to beneficial fungi in the soil,” Bever said. “The fungi may use that to grow hyphae and use them to defend plants from things in the soil that would harm them — and these fungi help aggregate soil that are resistant to erosion.”

Such perennial crops could lead to economic benefits for agricultural producers in the Great Plains region.

“It could have ramifications for Kansas,” Bever said. “The Land Institute has produced one crop, Kernza, which is grown commercially. We’re working on technological approaches that could improve the productivity of current crops of Kernza as well as future crops.”

These perennial crops — like Kernza now used to make bread, ice cream and a beer called “Long Root Ale” marketed by Patagonia Provisions — should be more productive in soil infused with fungi native to tallgrass prairie, according to the researcher.

“These are an ancient group of fungi that are associated with the first plants that colonized land back during the origin of plants,” he said. “They help plants to acquire phosphorous, which can be difficult to dislodge from mineral soil. Fungi act like extended root system for plants and increase the availability of these essential resources.”

To arrive at their findings, the researchers isolate native fungi from unplowed prairies and transport them to a greenhouse for testing in pot experiments as well as the field inoculation studies at the Gorrill Farmstead.

“It’s post-agricultural soil planted into pasture,” Bever said. “It’s already degraded soil. We don’t do anything to remove resident microbes — we just introduce better microbes. It could be that the resident microbes outcompete the good microbes. We need to find that out.”

Future research at the Gorrill Farmstead may center on the benefits of native fungi on the nutritional value of plants, as well as the impact of global climate change on the distribution of fungi on the Great Plains.

“Within Kansas, we’re looking at more severe droughts, and that opens up the question of if we should be inoculating plants with native fungi from further west that are drought adapted,” Bever said. “We have some initial suggestions that drought-adapted fungi would be a good idea moving forward, but that’s still uncertain. There might be a disparity of fungi matched to local soils and fungi matched to climate.”

Draft horses from across US enter show

Foot rot can cause loss in profits for cattle producers
May 19, 2022