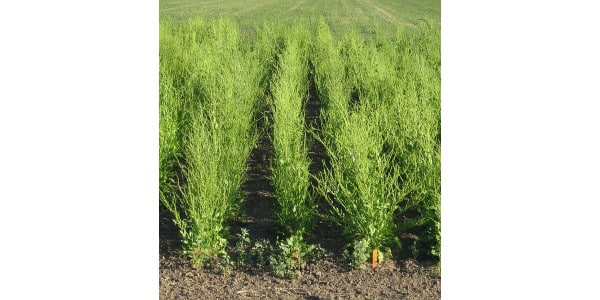 EAST LANSING, Mich. — Growers have the luxury of planting most vegetable crops on an annual basis, timed to avoid conditions that cause bolting, but some early seeded and transplanted crops may experience those conditions. Flowering in most winter annual and biennial plants is influenced by complex interactions between temperature, daylength and stresses of various kinds. Among these, periods of cool temperatures during early growth, followed by long daylight hours are often the most important determinant of unwanted bolting in vegetables. In this article we summarize the vernalization process for several vegetable crops and what that might mean for a spring with excellent growing conditions marked with periodic freezing and prolonged cool temperatures. Table 1 contains the vernalization requirements of vegetable crops.

Many vegetable crops come from wild relatives classified as a biennial or winter annual. Biennials are those plants that spend their first full season of growth putting energy into a storage area (root, fleshy leaves, stems, etc.) and then use their stored energy the second year to produce flowers and seed. Biennial crops produce the part we eat in their first year of growth and then are harvested before they go to seed. Winter annuals are plants that germinate in the fall or very early spring with high tolerance to winter temperatures as small plants and then flower in the spring or summer of the next year. They are planted in late spring or summer to avoid the conditions that cause them to flower.

Most biennial and winter annual vegetable crops are cool-season crops and have their origins in the Mediterranean region and grow best at temperatures between 50 and 70 degrees Fahrenheit. Many are also long-day plants, meaning that the transition to flowering or bulbing is stimulated only after daylengths exceed a critical daylength in late spring or early summer.

In addition to daylength requirements, most winter-hardy biennial and perennial crops in our growing region need a certain number of hours at cool temperatures after they have grown to a certain size before they will flower. This is a process called vernalization. The time (or leaf stage) before a crop becomes responsive to vernalizing temperatures is called its juvenile period. Not all vegetable biennials have a juvenile period, and some can even vernalize as a seed. For some spring planted biennial crops, a string of cool days or nights can precondition them to flower sooner than desired. This unwanted, premature flowering is called bolting in most crops. Some crops will also reverse their progress towards flowering when higher temperatures interrupt the cold ones and full vernalization has not been reached, and this is called devernalizing. However, other environmental stresses can also push the plants to bolt, including disease, drought and nutrient deficiencies.

Beets, chard and spinach were until recently classified in the Cheopodiaceae family but have now been absorbed into the Amaranthaceae family. All are receptive to vernalization as seeds and as young plants if exposed to temperatures between 41 and 48 F for one to five weeks. Beets and chard can even be vernalized as developing seeds on the mother plant. This is typically achieved if plants are overwintered but can also occur in the spring if they are planted early enough, conditions are mild enough for a prolonged period, and seed may have been partially vernalized on the mother plant.

Bok choi, broccoli, Brussels sprouts, cabbage, cauliflower, Chinese cabbage, collards, kale, kohlrabi, mizuna, radish, rutabaga and turnips are in the Brasscicaceae or ‘Mustard’ family. They have a wide variation in juvenile periods and temperature thresholds that will cause them to bolt. In general, once plants get to a certain size (between two and 15 leaves), then consistent temperatures within their vernalization range for two to eight weeks causes faster head formation. Long-maturing cabbage varieties can take as long as 20 weeks to vernalize while early maturing Chinese cabbage and cauliflower can take as little as one week. Cabbage, Chinese cabbage and kohlrabi will reverse their progress towards flowering and devernalize with temperature over 61 F immediately following vernalizing temperatures.

If vernalization happens too early in the spring before the plant is large enough to make a commercially acceptable product, this is called buttoning in broccoli and cauliflower. Brassica bolting generally occurs later in the season after the plant is vernalized and is driven by stress. It is usually characterized by the plant racing through its head formation to immediately create flowers in response to hot temperatures.

The ideal temperature schedule for raising broccoli and cauliflower is to maintain seedlings above 70 F in the greenhouse. Then transplant them early enough to accumulate vernalizing temperatures below 60 F at night, and warmer daytime temperatures to encourage vegetative growth over a few weeks to initiate flower formation at a gradual pace. Brussels sprouts, cabbage, collards and kohlrabi need longer times to vernalize, and are not usually threatened by early spring cool temperatures before summer weather arrives to keep them vegetative.

Bok choi, mizuna, radish, rutabaga and turnips are winter/spring annuals, and some cultivars may begin vernalizing as soon as seeds germinate. They are commonly planted in spring and summer to avoid cold temperatures that might vernalize them. For rutabaga and turnip, temperatures over 64 F will reverse their progress towards flowering and devernalize them. Radishes devernalize with temperatures over 68 F. There is little data on mizuna and bok choi, but they are closely related to Chinese cabbage and turnips and may have similar requirements. Once vernalized, long days going into mid- to late June can cause them to bolt.

Carrots, celeriac, celery, parsley and parsnips are in all the Apiaceae family and sometimes referred to as umbellifers due to their flower shape. These crops have a juvenile period that ranges from two to 20 leaves, after which they vernalize when exposed to temperatures between 35 and 48 F for two to 12 weeks. Of these crops, celeriac appears most susceptible to bolting because it does not require a large plant or a long time to vernalize. However, celery requires a larger plant to vernalize and a longer time compared to celeriac. Parsnips are unique in that they can go up to five years without flowering in the wild until their root crown reaches 3/16 of an inch in diameter. But, in an agricultural setting this is easily achieved in the first year of production, and overwintered parsnips will readily bolt in the next spring if they are not harvested in time.

Once the juvenile size has been reached, carrots, parsley and parsnips have similar temperature and time requirements. Carrots, celeriac and celery will reverse their progress towards flowering and devernalize with temperature over 68 F.

Bulb-forming onions, shallots, leeks and garlic have juvenile periods ranging from two to 17 leaves, after which they will vernalize with temperatures between 35 and 59 F for three to 12 weeks. Onions and shallots can reverse their progress towards flowering with temperature over 68 F, and some companies offer heat treated sets for this reason. Once an onion, shallot or leek plant flowers, it will not form a marketable bulb or stalk. For onions and shallots, the storage life is eliminated by the seed stalk going right through the center of the onion and rotting. Unlike onions, the flower stalks that emerge from garlic in the next season can be removed to maintain a larger bulb size, and shelf life is not reduced because the cloves form their own protective skins surrounding the stalk.

Garlic, shallot and some leek varieties are typically planted in the fall, and through the late fall and early spring they vernalize. Leeks grown this way will bolt in the late spring and should be harvested before they bolt. Shallot bulbs transplanted at the same time as garlic are less likely to bolt than garlic because shallots need to be larger plants before they respond to vernalizing temperatures and take longer to vernalize. However, larger shallot bulbs planted in late summer increases the likelihood of bolting in the next year.

Onions and shallots not only tolerate cool temperature but they are also day-length responsive. They are long-day plants for bulbing, which means that daylengths must exceed 12-16 hours (critical daylength) depending on variety in order for bulbing to be induced. Northern production areas usually grow onion varieties that get the signal to bulb as days get longer than 14 or 15 hours. This occurs late May or early June. Once plants receive this signal, they switch from producing larger plants to making a bulb and there is a direct correlation between prebulbing plant size and harvested bulb size. Therefore, many onion growers seed their long-day storage onions and transplant sweet onion sets and bareroot plants as soon as they can.

Shallots are uncommonly planted in the spring by transplant or seed. However, it is early transplanted sets or bareroot plants that are most susceptible to bolting because they are more likely to have completed their juvenile period. Short-day onions grown under protection on four-season production farms in the fall are also prone to bolting before bulbing by the same concepts.

Chicory, endive, globe artichoke, lettuce and radicchio are all Asters, and all can be vernalized from the point of germination when held at temperatures between 35 and 41 F for two to eight weeks, depending on the species and variety. Chicory, endive and lettuce can be vernalized as ungerminated seed, and chicory and lettuce can be vernalized as developing seeds on the mother plant. After vernalizing, daylength and temperature factor into the bolting of Aster crops. Vernalized plants grown at or above 70 F with 16 hours of daylight flower faster than unvernalized plants with temperatures less than 70 F, and shorter days.

In the case of globe artichoke, flowering is a desired effect. When chicory, endive and lettuce are planted in cool spring soils then exposed to the long days and warm nights in July, bolting can be an issue. All these crops will reverse their progress towards flowering and devernalize with temperatures above 68 F. Ways to prevent bolting are to keep seeds and transplants above that maximum vernalizing temperature for as long as possible, and direct seed after soils warm.

Periodic freezes and a prolonged period of cool temperatures in the spring will give biennial crops and winter/spring annual vegetable crops an accumulation of several hours in their vernalization range that could add to previous weeks where nights got below 50 as well. This may fully or partially vernalize some plantings of older, larger or earlier-maturing varieties of sweet onion, leeks, Brassica and celeriac/celery transplants to the point where they bolt later this spring and summer. The direct-seeded crops most at threat are beets, chard, spinach, lettuces, radishes and turnips because of their ability to vernalize as seed with short vernalizing times of one to four weeks for most of them.

Seeded carrots, parsnips, storage onions and fall-transplanted shallots are not as likely to bolt due to cold spring temperatures because of their larger juvenile plant size requirement and longer vernalizing times.

Onions bolting early can cause storage problems
May 29, 2018