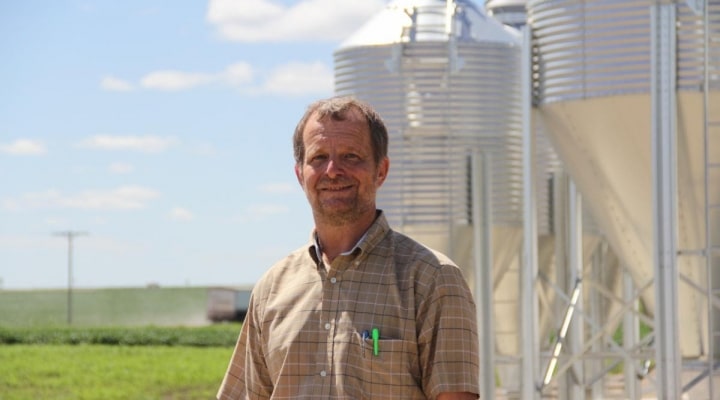 BROOKINGS, S.D. – Recently recognized for his professional accomplishments at the South Dakota State University Celebration of Faculty Excellence, Dr. Bob Thaler, professor of animal science and SDSU Extension Swine Specialist, was presented as the 2021 recipient of the Distinguished Professor Award.

The Distinguished Professor Award is the university’s ultimate academic recognition presented to those who have reached the pinnacle of their careers through distinguished performance and national or international recognition. It is given in acknowledgment of a professor who is a model of professional accomplishment in the College of Agriculture, Food and Environmental Sciences, and is the highest level of scholarly distinction given to any faculty member who exemplifies good character, professional integrity and outstanding citizenship within the university community.

“Dr. Thaler is an outstanding example of a distinguished professor because of the impacts that he has made on those that he unselfishly serves,” said John Killefer, South Dakota Corn Endowed Dean of the College of Agriculture, Food and Environmental Sciences. “He has influenced the careers of vast numbers of students, is a true professional colleague and has made our swine industry among the best in the world.”

Growing up on his family’s diversified farm in Wagner, South Dakota, Thaler discovered his passion for livestock at a young age. With the intent to become a veterinarian, Thaler attended SDSU and graduated with an animal science degree in 1982. After not getting accepted into veterinary school, he decided to change course and instead attended graduate school at SDSU where he earned his master’s degree in swine nutrition in 1984.

“Since it was 1982 and we were in the middle of the farm crisis, there was no room for me on the family farm, there weren’t many jobs and I was unsure of my future,” said Thaler. “Providentially, in my last semester, I was taking swine production with Dr. Rick Wahlstrom and he changed my life forever. He asked if I was interested in graduate school, but I had no idea what that meant at the time. After he explained it to me, I thought I’d get my master’s in swine nutrition and then get into vet school. However, after just one semester, I was enjoying graduate school so much that I never thought about vet school again, and the rest is history.”

Upon graduating with his master’s degree, he then attended Kansas State University where he completed his Ph.D. in swine nutrition and immunology in 1988. Shortly after, Wahlstrom, his master’s degree advisor, mentor and friend, retired, which provided Thaler and his wife, Karen, with an opportunity to return home to South Dakota where he began his career with SDSU Extension conducting production-focused research at the Southeast Research Farm near Beresford.

“I was able to start my career at SDSU surrounded by legends – Dan Gee in teaching, George Libal in research and Leon Wrage in Extension,” said Thaler. “It would be hard to find a better trio to learn from.”

Throughout his 33 years at SDSU, Thaler has taken on many different roles in teaching, research and Extension. In 1996, his role shifted to a 25% teaching and 75% Extension appointment.

At SDSU, he has created two different agricultural study abroad classes to China and Vietnam and an online swine nutrition class as part of the online swine science certificate program. Other courses taught by Thaler include a variety of animal science, range science, swine production and animal nutrition classes.

“I found that I loved teaching,” said Thaler. “Being married to the world’s best teacher in my wife, Karen, helped, and any success I’ve had can be directly attributed to the support of her and our three children Allyse, Sarah and Noah. When you think about it, the only difference between teaching and Extension is the age of the audience and where the teaching takes place.”

From 2005-2008, Thaler served as head of the Department of Animal and Range Sciences. Following that role, he was able to resume his Extension and teaching responsibilities and continue conducting research.

Thaler says his work as an SDSU Extension Swine Specialist has changed significantly over the years. Environmental Training for Concentrated Animal Feeding Operations (CAFOs), Pork Quality Assurance and Transport Quality Assurance programs have become a common way to answer producers’ questions and help South Dakotans who are less familiar with the swine industry understand the impact pork production has on rural communities and the state.

“We don’t hold county meetings anymore, and there are a lot fewer producers now,” said Thaler. “However, the level of expertise and professionalism of the pork producer today is extremely high, and that changes what we do and how we do it.”

Over the course of his career, Thaler has authored several books and chapters, and written over 150 articles for various SDSU Extension and industry publications. Additionally, he has participated in and produced several educational videos, episodes of the iGrow TV show and presented at numerous conferences and meetings for other institutions and industry organizations across the United States.

For his efforts in teaching, research and Extension, Thaler is a recipient of nearly 30 different awards. His SDSU accolades include the 2020 Dr. Richard Wahlstrom Animal Science Award for Excellence in Scholarship, the 2016 Global Engagement in International Education/Student Engagement Award, the 2006 and 2000 College of Agriculture and Biological Sciences Teacher of the Year Award, the 2005 SDSU President’s Medal of Honor, the Gamma Sigma Delta Award for Extension and teaching, the Director’s Award of Excellence in Extension for leading the manure management programs, the Dean’s Team Award for the Biostress Center of Excellence program and the South Dakota Extension Merit Award. Thaler was also the David Fee Memorial lecturer in 2006, an N.E. Hansen invited lecturer and is a member of the Epsilon Sigma Phi Honorary Extension Fraternity.

“While not awards, two projects that I am very proud to have been involved with are the development and complete funding for the SDSU Swine Unit Enhancement project completed in 2016 for $7.4 million dollars, and the development and funding for the Wahlstrom Room in the Animal Science Complex in 2008 for $150,000,” said Thaler. “Through the relationships developed by SDSU animal science faculty over many years, I was part of a team that was able to bring together a diverse coalition of industry leaders, farmers, and supporters to complete the project.”

Other honors include the Governor’s Ag Ambassador Award from former South Dakota Governor Dennis Daugaard in 2015, several awards from the South Dakota Pork Producers Council, a Fullbright Scholarship to Vietnam National University of Agriculture in 2018 and the National Pork Board’s Innovation Award in Teaching and Extension in 2003 among others.

“Dr. Thaler is recognized locally, regionally, nationally, and internationally as a leading educator in pig production,” said Joseph Cassady, head of the Department of Animal Science. “He is a true professional and passionate promoter of South Dakota State University.”

In regard to his international impact, Thaler has consulted extensively for the U.S. Soybean Export Council, the U.S. Grains Council, the U.S. Meat Export Federation and the U.S. Dairy Export Council resulting in over 30 trips to China, and multiple trips to Vietnam, Russia, the Philippines, Thailand, Venezuela, Japan, Taiwan, Mexico, Columbia, Peru, South Korea and Malaysia.

When asked what led him to his current career, Thaler says it was God’s plan for his life.

“I’m living proof of the saying ‘be grateful for unanswered prayers,’” said Thaler. “I get to work with talented colleagues, great producers, exceptional students who become producers, and excellent allied industry partners. Today SDSU is one of the few land grant universities that still values and expects strong undergraduate teaching and is a place where the Extension does make a positive difference in people’s lives. As one of my friends from private industry told me, ‘we have the world’s best jobs because we get paid to help our friends,’ and after 33 years here, the people I work with aren’t students and producers, they’re family and friends.”