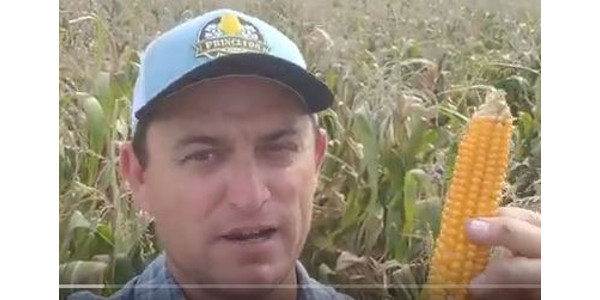 As a kid in the suburbs, Robert Ralph became curious about agriculture. He is now Farmer Bob, a first-generation farmer who is producing popcorn as a specialty crop and marketing it in Kansas City and as far away as a movie theater in Germany. (Courtesy of K-State Research and Extension)

MANHATTAN, Kan. — 100 to 1 return. Wow, that sounds like a remarkable return on investment. In this case, it doesn’t refer to a financial investment as much as it describes the process of growing a crop and multiplying the grain. Today we’ll learn about an innovative first-generation farmer who is finding his reward in multiplying his crop of popcorn. Thanks to Marlin Bates of K-State Research and Extension – Douglas County for this story idea.

Robert Ralph, also known as Farmer Bob, is the founder of Princeton Popcorn. Bob grew up in Overland Park when farm ground was still intermingled with the suburbs. “I was three or four years old and I remember petting cows through a barbed wire fence,” Bob said. That experience encouraged a lifelong interest in agriculture. He bought a small herd of cows and kept them with a friend outside of town.

After a few years, Bob bought some farmland of his own near Princeton, Kansas in Franklin County. The acreage had some timber, but no fences. “A friend of mine bulldozed a 30-foot path through the trees so I could build fence,” Bob said. “When I burned the brush pile and spread the ashes, I found that it enriched the soil.”

The concept of growing crops became exciting for him. He looked into the cost of seed and equipment and did a budget analysis. As a beginning farmer, with crop prices so low, he recognized that traditional row crops would not pay. Instead, he thought about alternative crops.

Bob bought a three-pound bag of popcorn off the shelf, fenced off a corner of his acreage, and planted it by hand. “A couple weeks later, I dug down and found a seed with a little root emerging from it,” Bob said. “It was like I found a million dollars. By the time that plant grew to 10 feet tall, I was really hooked.”

When he harvested the popcorn and tried popping it, it was initially too wet. When it dried and he popped it a couple of weeks later, it worked great. “I was elated,” Bob said.  He gave away the popcorn for family and friends to try.

Since that time, he has expanded his popcorn acreage, purchased improved farm equipment, and experimented with various cooking oils and flavors. He remains fascinated with the concept of multiplying a crop. “You put one seed in the ground and get hundreds back. That’s better than Vegas,” he said with a smile.

Bob bought popcorn seed from Zangger Popcorn Hybrids in Nebraska. “I couldn’t have gotten luckier,” he said. “Josh Zangger came down and gave me lots of great advice.”

“I’ve learned so much, I got to thinking that I should document this,” Bob said. His videos as Farmer Bob on Facebook have generated hundreds of views. Using the community name, he named his company Princeton Popcorn. “It’s a vertically integrated business, from seed to store,” he said.

Farmer Bob is working with Balls Food Stores and others to get his popcorn on the market. In 2020, he anticipates that Princeton Popcorn will be on sale in 90 stores in the Kansas City area. Bob was also contacted by a couple of movie theater owners in Germany. They were looking for top quality popcorn to sell, and they found Farmer Bob.  In 2020, Bob will be shipping Princeton Popcorn to their movie theaters in Germany.

Can a first-generation farmer succeed? “This is America,” Bob said. “I would like to encourage kids to open up their minds. You need confidence, determination, and a willingness to fail, but you can try again. This is a land of opportunity.”

100 to 1. That’s not a financial return as much as it expresses the remarkable growth of a crop, from a single seed to thousands. We commend Farmer Bob Ralph for making a difference with innovation, entrepreneurship, and growth – a hundred-fold.