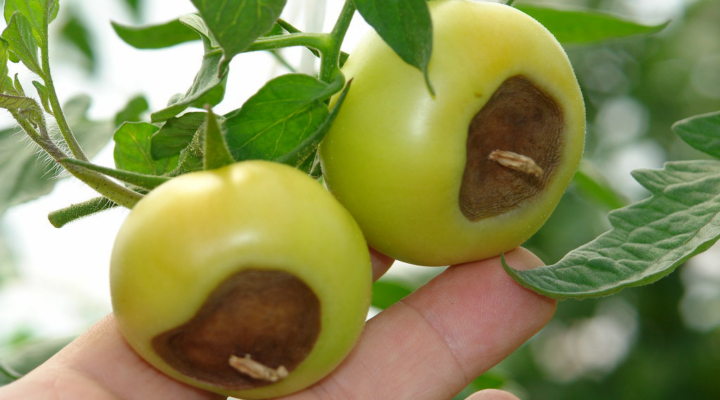 Blossom end rot is the scourge of many tomato growers. In addition to tomatoes, it can also be found in peppers, eggplant as well as squash and watermelons. (Scot Nelson, Flickr/Creative Commons)

JACKSONVILLE, Ill. — Blossom end rot is the scourge of many tomato growers. In addition to tomatoes, it can also be found in peppers, eggplant as well as squash and watermelons. When it comes to tomatoes, it is most commonly seen on larger fruited varieties, with long-fruited varieties (Roma type) being more susceptible than round varieties. Blossom end rot starts as a light tan water-soaked lesion (spot) at the end of the fruit where the blossom was (opposite end from the stem). The lesion will continue to grow and eventually turn black and leathery. Additionally, fungi and bacteria will often move in and case tissues to decay.

There are several reasons why plants may not be getting enough calcium. A lack of calcium in the soil is usually not the issue. Most of the time there is sufficient calcium in the soil, but the ability of the plant to take it up can be a problem. Calcium uptake by plants depends on active transpiration (leaves loose water in order to take up more water as well as nutrients from the soil, among other things) and anything that inhibits transpiration can inhibit calcium uptake. Additionally, leaves transpire more than the fruit so calcium moves into the leaves easier than the fruit. Factors that can contribute to blossom end rot include drought stress, fluctuating soil moisture, cold soils, waterlogged soils, or rapid vegetative growth due to excessive nitrogen fertilization. High concentrations of ammonium, potassium, and magnesium in the soil can also inhibit calcium uptake.

Others argue that cause of blossom end rot is abiotic stress to the plants, not a lack of calcium. Some experiments have shown that fruit in the early stages of developing blossom end rot have similar calcium levels to healthy fruit. These stresses, whether they be drought, high light intensity, heat cause cells in the fruits to die. The death of these cells results in blossom end rot.

Regardless of what school of thought you prescribe to, there are several different things you can do to try and prevent blossom end rot.