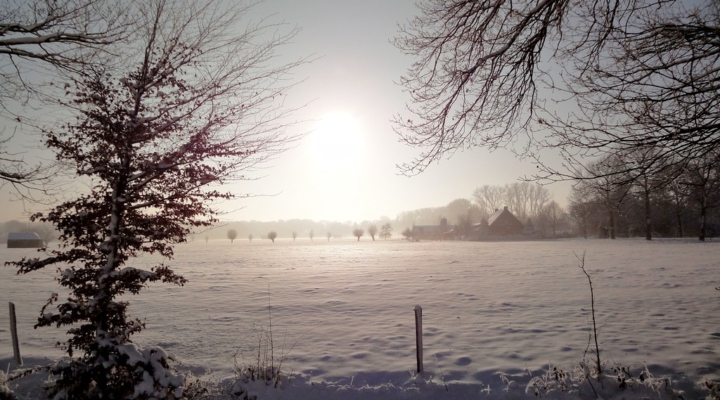 A storm with wind gusts of 50 to 60 mph and temperatures in the low to mid-teens sent wind chills plummeting near zero degrees, leaving 1,850 dairy cattle dead in the span of a few hours. With each cow valued by the dairies at $2,000, the loss was $3.7 million. (E. Dronkert, Flickr/Creative Commons)

SUNNYSIDE, Wash. (AP) — The unexpected blizzard that swept through the Yakima Valley on Feb. 9 was just one more clobbering for the region’s dairy farms.

The number of dairy farms in the state has plummeted from 2,500 in 1993 to 377 in 2018, according to the Washington Farm Bureau, which represents the mostly family-owned businesses. Four years of low milk prices have led numerous farmers to call it quits.

Dairy farms also face new state regulations for handling and storing cow manure that one dairy consultant estimates have initial costs of $300,000 to $2 million. Requirements include special liners for the lagoons holding the manure, and a mandatory leak-detection system.

But Yakima Valley dairy farmers were unprepared for what befell them on Feb. 9. A storm with wind gusts of 50 to 60 mph and temperatures in the low to mid-teens sent wind chills plummeting near zero degrees, leaving 1,850 dairy cattle dead in the span of a few hours. With each cow valued by the dairies at $2,000, the loss was $3.7 million.

Though dairy farmers can apply for reimbursement of 75 percent of the livestock’s market value for weather-related deaths through the U.S. Department of Agriculture’s Farm Service Agency, the loss hit Yakima Valley farmers hard.

“What next? Biblical plagues? A violent tornado?” says Stu Turner, a West Richland-based agronomist and consultant to the dairy industry. “They’ve faced almost everything that you can think of that’s negative.”

Dairy cows have died by the hundreds — even the thousands — before in blizzards. An estimated 35,000 cows died in December 2015 when a winter storm dubbed Goliath swept through West Texas and New Mexico. Tens of thousands more died in an October 2013 snowstorm in South Dakota.

PETA announced it would purchase either a billboard or maybe transit ads in the Yakima area to commemorate the deaths. The image will be of a mother cow and her calf, next to the words, “Not Your Mom? Not Your Milk! Choose Vegan.”

Jason Sheehan, who lost 200 cows at his J & K Dairy, says most of the dairy farmers who lost cows don’t want to be part of media coverage. Not far away from his farm is a dairy that lost 600 cows, he says, but that farmer didn’t want publicity.

“No matter how good a job we do, how well we care for the animals, people tend to turn it around on us,” Sheehan says. “There’s lot of keyboard warriors out there these days.”

In fact, few Americans know much about farm life. In 2016, only 1.5 percent of Americans were employed in agriculture, forestry, fishing or hunting, according to the U.S. Bureau of Labor Statistics.

‘We had employees in tears’

As you drive on the country road to the J & K Dairy about four miles east of Sunnyside, the scenery is of fields blanketed in snow and barns dotting a picturesque setting. Last week, even some sunshine poked through.

The National Weather Service office in Pendleton, Ore., which serves the Yakima Valley, says the blizzard warning it issued for the Feb. 9 storm was “the first time” it had issued such a warning for the area. That includes records going back to 2007, and institutional memory prior to that.

Trying to escape the wind and snow, the cows reverted to their herd instinct and bunched up. The result was that they trampled each other or suffocated.

“It was just overwhelming. We tried to move them, to quit bunching up, but it was just like people in a crowd, pushing, tripping over, falling down,” says Sheehan, who owns the dairy with his wife, Karen, and her parents, Tony and Brenda Veiga.

Sheehan says he and his workers were afraid for their own safety. They were in the midst of 1,500-pound cows.

“We did everything we could. Every one of these animals was raised by us. We had employees in tears, seeing the animals that had died,” he says.

The snow, says Sheehan, was swirling so much, “I couldn’t see the hand in front of my face.” It stuck to his clothes. Later, when he took off his coveralls, they were so frozen, “You could near stand them up.”

The day of the blizzard, at 6 in the morning on a Saturday, he says, he had met with his crew for the shift change. The 3,000-cow dairy employs 35 people. The weather forecast was calling for 25 mph winds and 3 to 5 inches of snow. They could deal with that, he thought. “We’ve had snowstorms before,” says Sheehan.

But they weren’t prepared for what happened within an hour. “The wind picked up and we hit 30 to 50 miles immediately at 7. They (the National Weather Service) were correct on the timing but completely missed the severity.”

Marc Austin, warning coordination meteorologist for the Weather Service, says a blizzard warning was issued at 5:29 a.m. Saturday, meaning 5-10 inches of snow and gusts up to 50 mph. The day before, it had issued a less-severe winter storm warning.

The meteorologist adds, “I can easily see if you take somebody who’s lived in that part of country their whole lives, they’ve seen some pretty bad storms, and maybe they thought this couldn’t be any worse than last time.”

The dairy farmers were left scrambling.

“A lot of them spent the whole 36 hours prior to the blizzard stacking bales of hay to make wind breaks, and trying to get the cows into some sort of makeshift shelters,” says Chelsi Riordan, spokeswoman for the Dairy Farmers of Washington.

But it wasn’t enough.

“The storm was something they had never seen before,” says Riordan.

In that region, dairy cows are kept in open pens with some roofing. It’s not freezing weather that concerns the farmers, but summer temperatures that are in the 90s, sometimes 100.

In addition to the 200 cows that died at the J & K Dairy, another 500 or so suffered frostbite to their teats, turning parts black and killing the tissue. Sheehan says he expects other dairies that suffered cow deaths to have twice as many frostbite cases. Some 15 farms suffered losses, says the Washington State Dairy Federation.

After the blizzard, Gov. Jay Inslee made $100,000 available to collect and haul the dead cows to a landfill in Oregon.

Sheehan says other choices were a rendering plant or to compost them on site.

Sheehan wouldn’t say what he’s done with his 200 dead cows. “If you look at social media, things get taken out of context,” he says.

Sheehan’s crew still has the 500 other cows with frostbite. At the milking barn, the cows get bag balm — a salve developed in 1899 for cracked cow udders — on their teats.

But if scar tissue remains, he says, “she can’t milk out” and workers end up squeezing out the milk manually, with infection possible because the teat won’t seal after milking. The cow then will be sold for meat.

Sheehan says his farm had been “at close to break even, maybe a little below” these past four years of low milk prices. He says prices went down because of overproduction as farms got more efficient and demand for milk dropped.

But milk prices had been rebounding. Things were looking for the better, until the blizzard.

Sheehan knows the ordeal was a news blip for many people.

But here at the dairy farms, a month later, they’re still reeling. Sheehan has no thoughts of quitting dairy farming, as many others have done.

“All farmers are eternal optimists, and always believe that if they do a good job, things will get better,” he says.

–BY ERIK LACITIS The Seattle Times