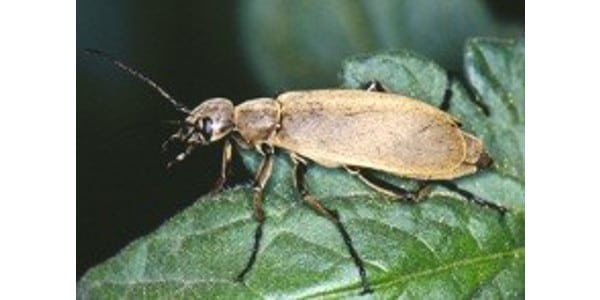 LINCOLN — Last year in another state, 14 horses died and another 100 were sickened from hay that contained blister beetles. Usually Blister beetles are not a problem, but growers should be aware of the insect and what to scout for in their fields.

Life Cycle of the Blister Beetle

The Blister beetle complete metamorphosis life cycle is unusual, complex and contains several immature forms. Blister beetles overwinter in a pseudo pupae stage in the soil. Final pupation occurs after an increase in temperature and moisture in the spring, from which adults emerge, usually in June and July. The adults congregate and feed on pollen, flowers and leaves of the host plant. The next generation begins when the adults mate and there is one generation per year. Two to three weeks after mating, the female adult beetles deposit up to six clutches of eggs, each containing 100 eggs in the soil near the host plants. After about two weeks, the eggs hatch into tiny mobile larvae called triungulins with legs designed for active movement in the soil. These larvae then search for food, primarily grasshopper eggs and solitary bee larval cells. As these larvae feed, they proceed through three more instars, gradually losing their legs and becoming sedentary. This final instar stage then transforms into the pseudo pupae form to overwinter in the soil to start the process again the next spring.

The damage consists of feeding on the pollen, flowers and leaves of the host plant. Other crops such as garden vegetables, potatoes, sugar beets, canola, soybeans and certain weeds can also be attacked. Damage to these plants can be extensive, although localized, and the real danger from this insect is to livestock.

There are no economic or treatment thresholds for Blister beetles. If the hay crop being harvested and marketed as horse feed / forage, the producer should scout the fields prior to harvest to determine if the beetles are present. Then the producer can decide if a course of action is warranted, whether chemical and / or cultural.

There are no known biocontrol options at this time.

There are no currently labeled seed treatments or at planting products available for Blister beetles. Foliar applications, whether by ground or air include carbaryl, pyrethrins, chloratraniliprole + lambdacyhalothrin, gamma-cyhalothrin, chlorpyrifos + gamma-cyhalothrin, chlorpyrifos + lambdacyhalothrin, lambdacyhalothrin. These provide limited control as they are short-lived and timing of application is critical for maximum efficacy against the target pest(s). The Blister beetles are mobile and can move into the crop at any time. Application of insecticides will kill the beetle, but the bodies and therefore the cantharidin will potentially remain in the hay crop to be ingested by livestock. Preharvest interval is very important when using insecticides for this pest. Ground application carrier rates vary by product label, but in general are a minimum of 5 GPA to 20 GPA or “adequate for coverage”. Aerial application carrier rates also vary by product label, but in general are a minimum of 1 GPA to 5 GPA. There are many different product label names that contain the same or similar active ingredients and formulations, but may not have the site / crop listed on the label. Use of products without the site / crop listed is a violation of federal law. Not all common name products, active ingredients and their methods of application are listed and are not limited to these shown. Chemigation may be a method of application on some product labels and additional information such as application set-backs / buffer zones from well heads, bodies of water, drift, etc. should be reviewed. Chemical controls are part of an IPM program and all options should be considered when implementing one. When considering a chemical option, the producer must read, understand and follow all label directions. If the producer has any questions, he should consult the chemical representative and / or his local agricultural chemical dealer or applicator. Some items to review when considering a chemical treatment option or options are the preharvest interval and the replant interval to other crops after application. Other items include tank mixes, tank mix compatibility, tank mix order of mixing, timing of application when considering bees and other pollinators. The product(s) may be a restricted use pesticide, application records kept, the field may have to be posted prior to and after application. The producer should also consult the local agricultural chemical dealer, applicator, chemical representative and / or local extension personnel to determine the efficacy history and any known pest resistance. Most product labels now contain and are classified by “insecticide mode of action groups” to help manage insect resistance.

No physical controls are available for the management of Blister beetles in field crop situations.

No known plant resistant Blister beetle varieties of alfalfa are available to producers at this time.

For related information on blister beetle, see Dealing With Blister Beetle on beef.unl.edu.

NeCGA statement on the reregistration of atrazine
September 22, 2020

Is alfalfa autotoxicity the cause of your poor stand?
August 6, 2020