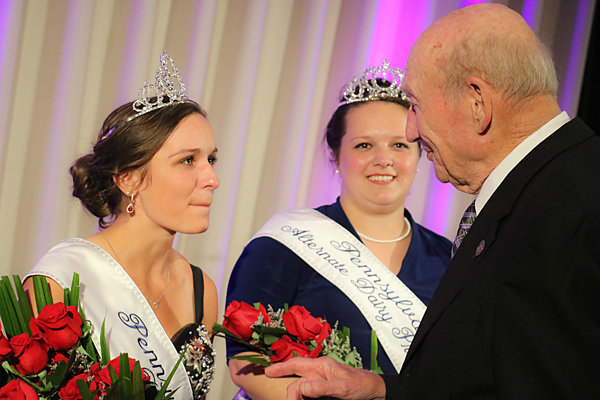 HARRISBURG, Pa. — Yvonne Longenecker of Williamsburg, Blair County, will represent the state’s dairy industry at events across the state for the next year as its 61st Pennsylvania Dairy Princess.

Her coronation on Sept. 23 concluded a three-day competition with 26 other county dairy princesses. Yvonne, the 17-year-old daughter of Douglass and Yvette Longenecker, was crowned by outgoing state princess Halee Wasson of State College, Centre County.

Contestants were judged on public speaking, dairy industry knowledge, poise and personality. Each contestant prepared a speech, presentation, radio spot, poster display and recipe promoting milk and dairy products; submitted a scrapbook of promotion activities; took a quiz on dairy promotion knowledge; and interviewed with a panel of four judges.

Yvonne won the poster display contest and was named runner up in the presentation and speech competitions.

A junior at Central High School in Martinsburg, Blair County, Yvonne is secretary of the Central Cove FFA Chapter, vice president of the National Honor Society, and a member of the tennis team. In addition to serving in leadership roles with her local 4-H lamb, beef and dairy clubs, Yvonne has been named Outstanding Blair County 4-H Member for the past three years and has also received the Teen Leader Award. She attends Martinsburg Grace Brethren Church and its Synergy Youth Group. Yvonne hopes to attend the Pennsylvania State University to pursue agricultural sciences.

Two alternates also were selected during the evening festivities. First alternate is Centre County Dairy Princess Gretchen Little. The 16-year-old daughter of Kris and Karen Little, she lives on her family’s first-generation dairy farm outside Bellefonte, Centre County. As a junior at Bellefonte Area High School achieving high honors, she is vice president of the Bellefonte FFA Chapter who has earned her Greenhand and Chapter degrees, is a student advisor for the school’s sustainable gardening project, and is active in other clubs. She Is president of the Mount Nittany Dairy and Marion Walker 4-H clubs.

Gretchen won the scrapbook contest and took honorable mention with her royal recipe, radio spot and speech. She was crowned by outgoing first alternate Brittany Haag of Mohrsville, Berks County.

Second alternate is Chester County Princess Casandra Blickley, 20, of Elverson, Chester County. The daughter of Shawn and Roslyn Blickley, Casandra is a junior at Delaware Valley University majoring in large animal science with a minor in dairy sciences. In addition to membership in the university’s Dairy Society and participation in the Dairy Challenge and Northeast Student Affiliate program, Casandra is herdsman at Kurtland robotic dairy farm in Elverson, Chester County. She hopes to pursue a career in the dairy genetics field.

Casandra won the dairy promotion knowledge competition and presentation awards, was runner-up in the poster display, and received honorable mention for her radio spot and scrapbook. She was crowned by outgoing second alternate Katie Anderson of Three Springs, Huntingdon County.

In addition to Yvonne, Gretchen and Casandra, the four other selected finalists were:

Katie Anderson, 20, was honored with the Tina M. Shultz Award. The award recognizes the princess who has done the most effective job of serving her area as dairy princess. During her county reign, not including her specific state princess duties, Katie completed 1,220 dairy promotions and logged 12,000 miles representing the dairy farmer, milk and dairy products. Katie was praised for her unique approach to sharing the dairy story, including messages in church bulletins and newsletters throughout the county, which helped her to attain top promoter status against all other county programs for all 12 months of her reign.

The award honors the legacy of 1985-86 Huntingdon County Dairy Princess Tina Marie Shultz, lauded for her outstanding job of promoting the dairy industry and its products under extremely difficult personal circumstances. Despite losing her left leg to cancer just three months before her county pageant, Tina seldom missed an engagement or opportunity to promote. The “Outstanding County Promoter Award” was rechristened for Shultz after her death in May 1986. Members of the Shultz family attended the coronation pageant, and Tina’s mother Ruby Shultz, still of Huntingdon County, presented the award on stage to Katie.

Halee received the William C. Nichol Appreciation Award and $1,000 scholarship, which is awarded to the state dairy princess in recognition of her dairy promotion efforts throughout the year.

For the next year, the new state royalty team will represent Pennsylvania’s dairy industry and its 6,650 dairy farm families. Dairy is the state’s top agriculture industry sector, contributing nearly $6 billion to the economy and supporting more than 60,000 jobs across the state.