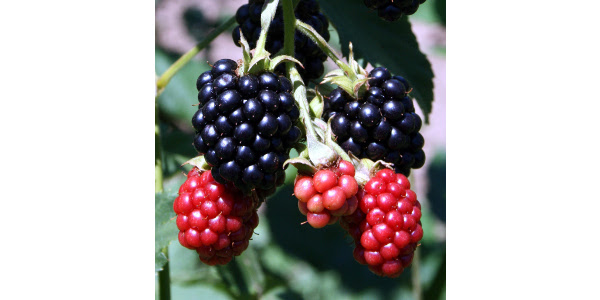 Looking for a crop with great potential in the Panhandle? The University of Florida has done in-depth research on the best cultivars for our area, weed management, and how many chill hours blackberries require. Blackberry breeders have developed thornless cultivars that are recommended for U-Pick operations. (file photo courtesy of Webb City Farmers Market)

MARIANNA, Fla. — Looking for a crop with great potential in the Panhandle? The University of Florida has done in-depth research on the best cultivars for our area, weed management, and how many chill hours blackberries require. Blackberry breeders have developed thornless cultivars that are recommended for U-Pick operations. Also, there are more varieties with disease resistance, better fruit quality, and the adaptability to our climate. In the past, the southern United States had a major limitation in commercial blackberry production due to the absence of a suitable variety that had resistance to double blossom disease. This disease causes distortion of flowers and reduces the fruit load severely. In Florida there were 64 acres of blackberries in 2007 and increased by 70% in ten years to 173 acres. These acres are in Central Florida counties which only average about 250 chill hours per a year.

The cultivars are broken down into two types of fruiting. There is floricane-fruiting which is when fruiting cultivars can only bear fruits on the floricanes after dormancy and there are primocane-fruiting cultivars where they can bear fruits on primocanes in late-summer and again on floricanes in the following early summer. Even though primocane cultivars produce two crops in a year the yield and quality of fruit is poor in Florida. It is recommended to plant a floricane fruiting type such as Ouachita, Osage, and Natchez. Natchez will have higher yields in the beginning but poor fruit quality and decline by the 3rd year. If going with a primocane-fruiting variety, Prime Ark Freedom is a good option for U-Pick farms.

Ouachita is a thornless cultivar that ripens between mid-May and late June and produces medium, firm fruits with high Brix (sugars) and good flavors. This is one of the most common U-Pick farm cultivars in Florida. Osage is a thornless cultivar that has moderate vigor and grows well here. Fruits ripen a little later in North Florida and are sweet and firm with good postharvest quality for shipping. Natchez produces larger and softer fruits with the highest yield of the Florida cultivars tested. The fruit is more seedy with a tart taste, but when harvested later in the season they are sweeter and more flavorful. This variety does tend to decline and plant vigor decreases year by year. Prime-Ark Freedom is going to be your best option if wanting to go with a primocane-fruiting cultivar. These plants are vigorous and produce strong canes. The fruits ripen between April and June and are large. They do produce twice a year but only expect high yields in the spring.

Weed management is very important to ensure the plants to get the nutrients they need. Glyphosate is effective for removing competition 30 days prior to planting the crops. Plastic mulch or tarps can be used to control in-row weeds and a turf or cover crops will help control the weeds in between the beds. It is important not to apply Glyphosate within 14 days of harvest and be careful of drift. Do not allow it to contact the foliage, it will kill it. Clethodim (Select) can be used at low rates for annual grasses but higher rates are needed for perennial grass control. Hand weeding is the only way to control weeds in the planting holes. It is important to avoid buildup of soil or mulch on the plastic, that is how the weeds can survive.

Be careful of residual herbicides when selling hay/straw