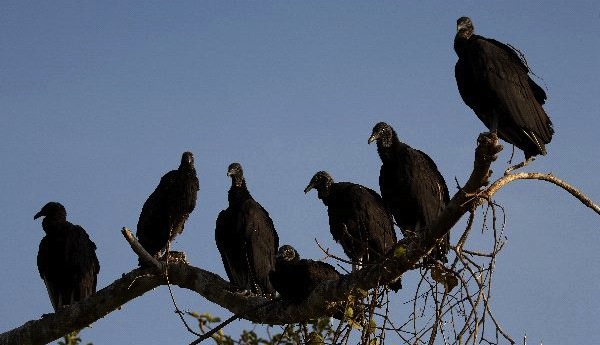 Indiana Farm Bureau has announced that its members may obtain permits through INFB that allow legal “takes” of black vultures that are attacking livestock such as newborn calves and sheep.

INDIANAPOLIS — In recent years, the black vulture population has increased in Indiana, particularly in the southern portion of the state. These birds often prey on young livestock, causing injury and sometimes death, creating major financial losses for some livestock producers.

Indiana Farm Bureau has announced that its members may obtain permits through INFB that allow legal “takes” of black vultures that are attacking livestock such as newborn calves and sheep. INFB has obtained a statewide depredation permit for black vultures from the U.S. Fish and Wildlife Service (USFWS). As migratory birds, black vultures are protected by the Migratory Bird Treaty Act, state laws and regulations, therefore, they can’t be killed or destroyed without a migratory bird depredation permit.

INFB has the authority to issue up to 100 total sub-permits per year as a benefit to Farm Bureau members who are experiencing problems with black vultures. The permits cover commercial livestock, which includes cattle, horses, sheep, goats, and swine.

“This program expedites the permit process and reduces costs for livestock producers, and we are happy to be able to offer this benefit exclusively to Indiana Farm Bureau members,” said Greg Slipher, INFB livestock specialist. “Farm Bureaus in Kentucky, Tennessee and Missouri have similar offerings, and we hope our efforts in Indiana will reduce conflicts between black vultures and livestock production.”

The sub-permits, which are for black vultures only, not turkey vultures or other birds, are good for up to 12 months, depending on when the permit was issued. Permits will be issued based on specific criteria. Approved applicants will be allowed a maximum of five birds, but the exact number will be determined by the application score. Applicants must agree to follow all rules and regulations required by USFWS in the INFB statewide permit.

Other ag organizations who witness the impact of black vultures are pleased that this new opportunity is available, including the Indiana Beef Cattle Association, who also will promote the depredation permits to their members.

While black vultures are extremely detrimental to livestock producers, they do impact conservation and agriculture resources by cleaning up animal carcasses from the ecosystem.

“Our goal is to educate producers on techniques and resources to help alleviate depredation issues concerning these birds,” said Lee Humberg, Indiana State Director for the U.S. Department of Agriculture, Wildlife Services program. “Livestock producers can assist by reducing attractants, such as promptly removing or burying dead livestock and removing dead trees from pastures or birthing areas.”  Humberg noted that active hazing with sound and light also helps to disperse vultures, as well as utilizing passive tools like effigies.

Interested livestock producers may request a sub-permit application by contacting Greg Slipher at gslipher@infb.org or 317-692-7886. For more information on the issue and details on the sub-permit, visit www.infb.org/blackvultures. 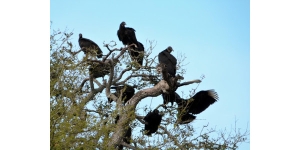 DAVIDSONVILLE, Md. — Maryland Farm Bureau (MDFB), in partnership with the U.S. Fish and Wildlife Service (USFWS), announced that producer permits for the control of black vulture depredation are now available, and can be obtained through MDFB. Black vultures can kill livestock young and damage property. They can work together as a “wake” and attack […]

COLUMBUS, Ohio — The U.S. Department of Agriculture announced this week that approved applicants – who will be determined after consultation with USDA’s Wildlife Services – will be allowed to remove up to five black vultures in Ohio. Applicants must agree to follow all rules and regulations required by the U.S. Fish and Wildlife Service in […] 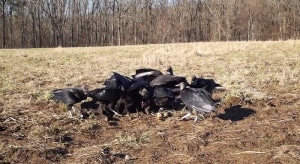 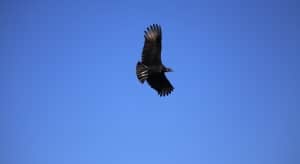 OKLAHOMA CITY — Black vulture attacks on livestock are a serious issue for Oklahoma producers. Because of this, the Oklahoma Department of Agriculture, Food and Forestry has obtained a master depredation permit through the USDA and the U.S. Fish and Wildlife Services and is now offering sub-permits to Oklahoma residents free of charge to dispose of […]

WEST LAFAYETTE, Ind. — Vultures play an important role in the ecosystem cleaning up animal carcasses from the landscape. However, although primarily scavengers, some black vultures cause problems for cattle operators in southern Indiana, harassing and even preying on young calves and other livestock. Historically common in southern states, black vultures have expanded into Indiana […]