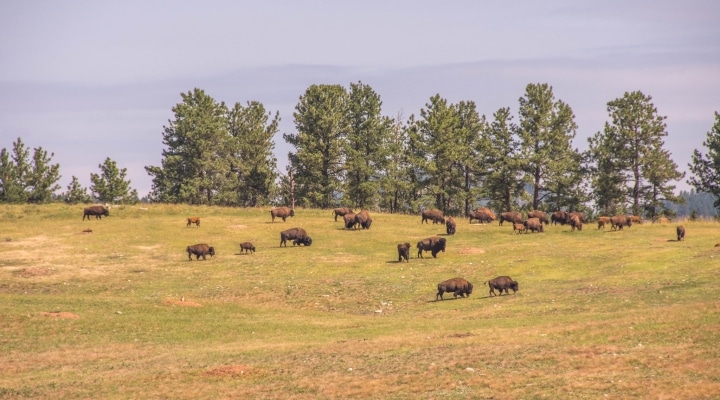 Bison meat is experiencing a resurgence, particularly among health-conscious consumers who appreciate its health benefits. Compared to beef, it’s also high in protein and omega-3 fats, and rich in iron, zinc and vitamin B12. (photo by Wayne Hsieh, Creative Commons/flickr.com)

CULPEPER, Va. — Beef cattle may reign supreme for steaks and burgers, but some Virginia farmers have carved out a niche market with bison.

Bison meat is experiencing a resurgence, particularly among health-conscious consumers who appreciate its health benefits. Compared to beef, it’s also high in protein and omega-3 fats, and rich in iron, zinc and vitamin B12.

“It’s one of the best red meats in the world for human consumption,” said Culpeper County Farm Bureaumember Mike Sipes, who co-owns Virginia Bison Company at Cibola Farms with Rob Ferguson. They have about 350 bison on their Culpeper County farm.

“The nutritional value is off the charts,” he said.

But it’s still a niche market. According to the most recent United States Department of Agriculture census, there were 729 bison on eight Virginia bison farms in 2017.

Mike Morris, owner of Melrose Bison Farm in Campbell County, raises about 50 bison. He said many U.S. bison farmers have smaller herds like him to serve their local markets and can’t supply meat on a large scale like cattle operations.

“They process more cattle in a day in the U.S. than they do bison in a year,” Morris said.

There was a time when millions of bison roamed North America, but in the 1800s, they were slaughtered to near extinction. With around 385,000 bison in North America today, conservation efforts in state and national parks and by independent farmers help keep bison alive.

“It’s farmers like us and national parks that are really putting in the effort and bringing them back,” Sipes said.

Raising bison can be challenging and expensive for farmers. Bison herds grow slowly as breeding is left to nature—they don’t respond well to artificial insemination or embryo transfer. They’re also wild animals, and require special wildlife fencing and a different way of handling.

“They’re not as much work as cattle, but it’s a lot more intense,” Morris said. “You’re always kind of redesigning things.”

Numbers are growing though, and as the commercial market expands, more people become interested.

“If you overcook them, you might as well chew on your shoe,” Morris advised.