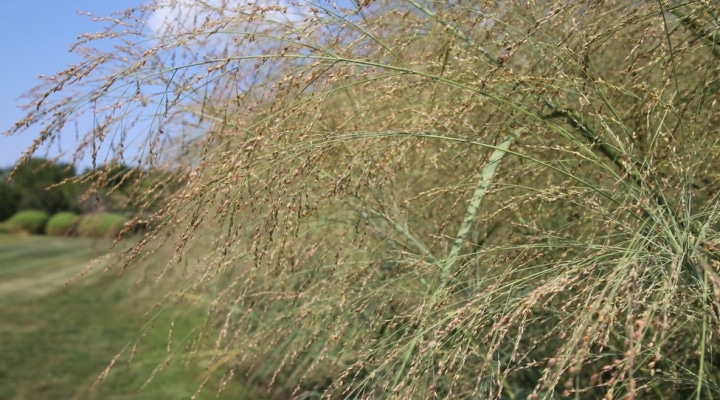 Newly published Michigan State University research details how switchgrass, a biofuel crop, can mitigate effects of climate change when grown on marginal land — agricultural land of little value. For farmers, it may also provide a chance to see economic returns in these otherwise unproductive spaces. (University of Illinois, DK Lee)

The research was published in Environmental Research Letters.

The team was led by Bruno Basso, an MSU Foundation Professor in the departments of Earth and Environmental Sciences, and Plant, Soil and Microbial Sciences, as well as the W.K. Kellogg Biological Station. Seungdo Kim, an associate research professor in the MSU College of Engineering, and Rafael Martinez-Feria, a postdoctoral researcher in Basso’s laboratory, were also involved.

Renewable energy is a topic of significant discussion worldwide. Climate scientists warn of catastrophic outcomes if fossil fuels remain the primary energy source into the future. Additionally, countries such as the U.S. are reckoning with the ethical and financial dilemmas of relying on foreign oil.

Lignocellulosic biofuels, which are made from plant biomass, are one of the only current renewable energy sources with potential as an fuel alternative for vehicles. But fossil fuel problems aren’t easily solved by simply planting more biofuel crops such as switchgrass.

“Growing enough to use biofuel crops for the transportation sector at a large scale would require massive land use changes,” Basso said. “This is a problem with many layers. There are food security concerns if land previously used for food crops was shifted to biofuel crops. There are also greenhouse gas emission concerns if land not currently used for agriculture, such as wildlife habitat, is overtaken by crop production systems.”

The challenge is magnified when farmers consider what to do with marginal, less-productive land. With rising input costs, there is often little to no advantage to plant in these areas. If growers do decide to plant, environmental issues abound, as these fields are often nitrogen-deficient and may require heavy use of fertilizers.

“To get farmers to change their behavior, the change has to make sense for them economically first and foremost,” Basso said. “Our goal was to examine whether marginal lands could be both profitable and environmentally conscious, something that would be a victory for everyone involved.”

For this project, Basso and his team used a multi-model ensemble of crop simulation systems that factor in soil, weather and management data. These included three models from previous studies and Basso’s System Approach to Land Use Sustainability (SALUS) program, which simulates daily crop production over many years using different management strategies.

The multi-model ensemble is designed to better understand and quantify the uncertainties coming from model input and parameters unique to each model. Basso said this is the first study to use a model ensemble linked to artificial intelligence for switchgrass used for bioenergy production.

Basso’s team discovered that low amounts of nitrogen fertilizer provided long-term boosts in yield that outweighed greenhouse gas emissions, a finding that runs contrary to other studies. Researchers believe the benefit can be much greater on lands limited by nitrogen deficiency, which is the case in several areas of Michigan. Basso noted that the use of this strategy is not as effective in areas with rich soil organic carbon or those with low precipitation and short growing seasons.

“This shows that some marginal lands lacking nitrogen have potential value for biofuel crop production, which is of interest to farmers looking to increase profitability and of environmental importance by reducing the carbon footprint of the operation,” Basso said. “It’s important that when trying to solve a problem we don’t create another, so the levels of added nitrogen fertilizer are crucial to maintaining the overall net-positive climate result.”