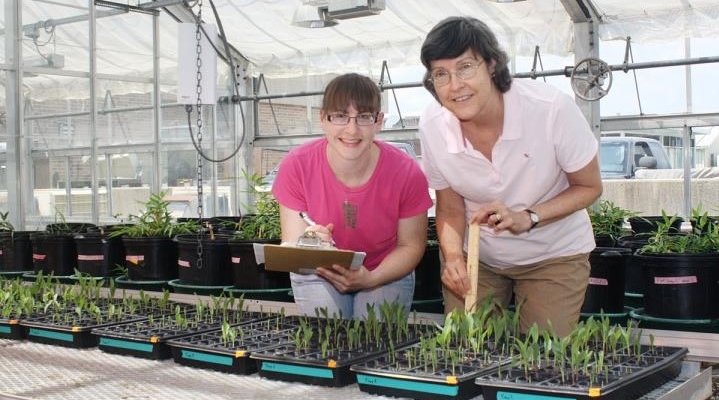 Illinois Sustainable Technology Center researchers Elizabeth Maschewski, left, and Nancy Holm and collaborators developed a systematic study to test the effectiveness of the soil additive biochar and found that it may not be as effective as previously thought. (Photo courtesy Nancy Holm)

CHAMPAIGN, Ill. — Biochar may not be the miracle soil additive that many farmers and researchers hoped it to be, according to a new University of Illinois study. Biochar may boost the agricultural yield of some soils – especially poor quality ones – but there is no consensus on its effectiveness. Researchers tested different soils’ responses to multiple biochar types and were unable to verify their ability to increase plant growth. However, the study did show biochar’s ability to affect soil greenhouse gas emissions.

The new findings are published in the journal Chemosphere.

Biochar additives – particles of organic material burned in a controlled oxygen-free process – provide soil with a form of carbon that is more resistant to microbial action than traditional, uncharred biomass additives. In theory, this property should allow soil to hold onto carbon for long-term storage, the researchers said, because it does not degrade as rapidly as other forms of carbon.

“There are conflicting reports on the effectiveness of biochar for use to increase crop production as well as its potential as a carbon-storage reservoir,” said Nancy Holm, an Illinois Sustainable Technology Center researcher and study co-author. “We came into this study suspecting that variations in types of biochar feedstock, preparation methods and soil composition were the cause of the conflicting results.”

To add a dimension to the study that is common in real-world agricultural settings, the team also examined how two other sources of carbon – plant material burned in an uncontrolled open-atmosphere setting and corn stover – affect soils. Corn stover is composed of raw stalks, leaves and cobs that remain in the field after harvest.

Factoring in each scenario, triplicate analysis and control samples, the experiment produced 429 soil samples in which the researchers planted two corn seeds each.

After a 14-day germination period, the study showed that adding biochar from any of the feedstocks or production techniques had no substantial influence on the output of greenhouse gas production, plant growth dynamics or microbial community activity. However, the researchers did see some important differences in the soils that included corn stover and burnt plant material.

“The addition of corn stover – which simulates actual field conditions – led to a dramatic increase in greenhouse gas emissions, as well as a change in the soil microbial community,” said Elizabeth Meschewski, an ISTC researcher and lead author of the study. “But, initial seedling growth was not affected when comparing these results to the soils with no additives. Addition of burnt plant material did show reduced plant biomass above ground, increased production of the greenhouse gas nitrogen oxide and altered soil microbial community.”

The team concluded that biochar might improve the quality of highly degraded or poor quality soils, but does not appear to provide any quality benefit to the soils used in this study. However, the researchers said that using biochar as an additive instead of raw biomass or burnt plant material could prevent microbe-generated greenhouse gas emissions.

The team acknowledges that a longer-period study is needed for a more comprehensive understanding of how biochar may benefit agriculture.

“For future studies, we recommend performing a similar study in many different soil types for the whole growing season for corn – not just 14 days – and possibly over several growing seasons,” said ISTC researcher and study co-author B.K. Sharma.

–University of Illinois at Urbana-Champaign, News Bureau
via EurekAlert!