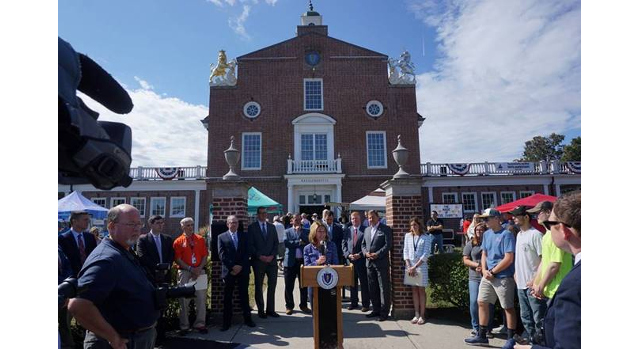 “Our administration is proud to be part of this 100-year tradition of showcasing Massachusetts from the Berkshires to Cape Cod to visitors throughout New England,” said Governor Charlie Baker. “On the 100th Anniversary of the Massachusetts Building, we encourage all Big E fairgoers to be sure to check out the many vendors and organizations in the building representing some of the best the Commonwealth has to offer.”

“It is amazing to look back on the past century and see how the Massachusetts State Exposition Building has showcased the very best of Massachusetts agriculture, tourism and commerce,” said Lt. Governor Karyn Polito. “We want to thank all of the vendors and organizations that have exhibited over the years and those exhibitors today that continue the legacy of promoting the Commonwealth.”

The rededication ceremony included a speaking program, celebratory toast, and the dedication of a bronze plaque in honor of the building’s anniversary. The ceremony occurred 100 years to the date in 1919 when Lt. Governor Channing H. Cox dedicated the building on behalf of Governor Calvin Coolidge after its $50,000 construction.

“The Baker-Polito Administration is proud to recognize this incredible milestone for the Massachusetts Building and Big E Fair,” said Energy and Environmental Affairs Secretary Kathleen Theoharides. “The building’s exhibits have evolved through the years to reflect the changes in industry, agriculture and commerce while still preserving our history and culture.”

“This year is special for the Massachusetts State Exposition Building as it celebrates its centennial anniversary on the grounds of the Eastern States Exposition,” said MDAR Commissioner John Lebeaux. “We are excited to be the first building on the Avenue of States to reach this historic milestone and plan to celebrate its birthday in a fitting fashion with entertainment, giveaways, special vendors and of course, locally-made cake.”

“The creation of the Avenue of States began with the construction of the Massachusetts Building on the grounds of Eastern States Exposition 100 years ago,” said Eastern States Exposition President and CEO Eugene J. Cassidy. “It was the dream of our founder, Joshua L. Brooks, to create a premier showcase for the six New England states to display their character and products. It is my distinct pleasure to usher in a new century of the continuation of that dream.”

Below is a list of this year’s Massachusetts State Exposition Building vendors for the 17-day fair: