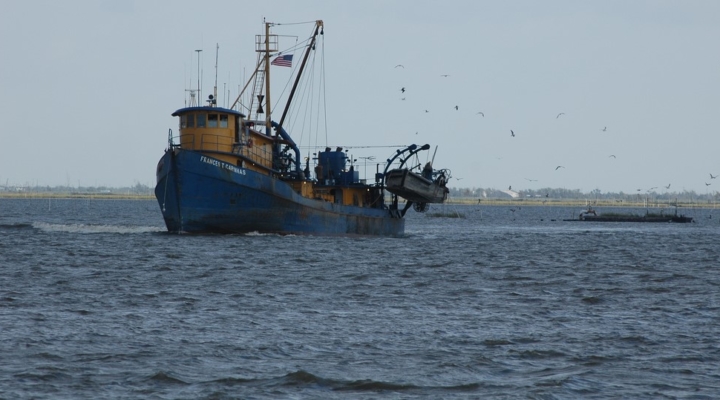 The Atlantic States Marine Fisheries Commission is considering new management tools crafted with an eye toward menhaden's key environmental role, which could involve reducing the amount of the fish that can be caught by commercial fishermen. (Louisiana Sea Grant College Program Louisiana State University, Flickr/Creative Commons)

PORTLAND, Maine (AP) — Changes in the way some small fish are managed could have major implications for the ocean ecosystem and marine industries on the East Coast, according to conservationists, fishing groups and scientists.

Interstate regulators are considering altering the way they manage menhaden to better account for its role as one of the most important fish in the sea.

The schooling fish makes up a key piece of the Atlantic Ocean’s food web, as important prey for whales, seabirds and large fish. Menhaden is also used in products such as aquaculture feed and fish oil supplements.

The U.S. commercial fishermen catch more than a billion pounds (0.45 billion kilograms) of the fish per year.

The Atlantic States Marine Fisheries Commission is considering new management tools crafted with an eye toward menhaden’s key environmental role, which could involve reducing the amount of the fish that can be caught by commercial fishermen.

The regulation changes could also impact the size and distribution of the fishing fleet, as well as the kind of gear that is used, said Tina Berger, a spokeswoman for the Atlantic States.

The possibility of changing how menhaden are managed reflects a movement to begin looking at them not just as a single species, but in terms of “how we can leave enough menhaden in the water for the predatory species that rely on them,” Berger said.

An arm of the commission is bringing the subject up for a key vote on Nov. 13 in Linthicum, Maryland. It’s accepting public comments on the subject until Oct. 24 and has received about 11,000 so far.

The proposal has galvanized environmentalists and some scientists, who say the commission should do everything in its power to protect the fish.

“There’s a lot of science that says these fish are very important to the health of the ocean,” said Ellen Pikitch, a marine fisheries scientist with Stony Brook University in New York. “There’s every reason to move forward right now, and not wait.”

But some commercial harvesters of the fish said cutting the amount of menhaden they take wouldn’t be an evidence-based move. Scientific stock assessments have shown that menhaden are not being overfished, said Ben Landry, a spokesman for Houston-based Omega Protein, which is the largest harvester of menhaden in the Atlantic.

“That’s what your scientists are spending all this time doing. It’s kind of a slap in the face to the harvesters,” Landry said.

Menhaden are fished commercially up and down the East Coast, and are also used as bait in important fisheries, including those for lobster. They are also well known to recreational fishermen, who call them “pogy” and “bunker” and use them to catch larger fish like striped bass and bluefish.