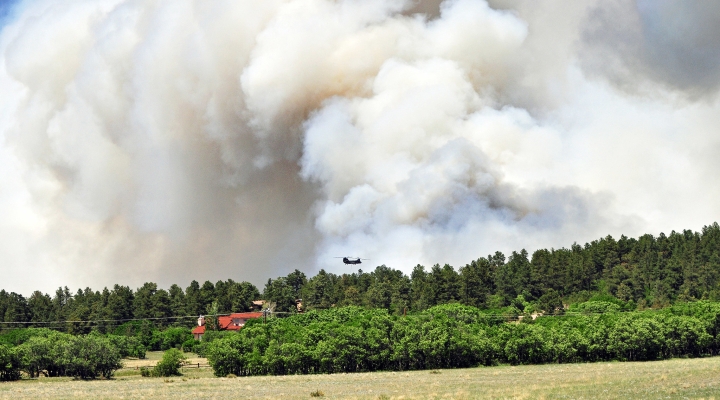 Since releasing its 10-year wildfire strategy earlier this year, the Forest Service and its partners have used the best available science to identify the highest risk landscapes for treatment projects. The Forest Service found that around 80% of the wildfire risk to communities is concentrated in less than 10% of “firesheds,” or areas where wildfires are likely to threaten communities and resources. These initial investments focus on firesheds of the highest risk, where projects are ready to begin or to expand.

“Thanks to the investments made in President Biden’s Bipartisan Infrastructure Law, USDA is taking the next step in reducing wildfire risk, especially in western states where communities, infrastructure and resources are at the most risk,” said Secretary Vilsack. “The people of Colorado need no reminding of the dire threat wildfire presents to states across the West. In 2020, Coloradans saw three of their largest fires on record. With the investments we’re announcing today, USDA will do its part to make your communities safer and our forests more resilient to our changing climate.”

“These efforts to reduce wildfire risk to communities located in these landscapes are just the beginning,” said Forest Service Chief Randy Moore. “The first-year investments are a part of a 10-year strategy to reduce the exposure of communities and infrastructure to the risk of catastrophic wildfire. With each successive year we will plan and implement more, continuing to reduce the risks associated with extreme wildfire for communities in these vulnerable areas.”

“Climate change continues to drive the devastating intersection of extreme heat, drought and wildland fire danger across the United States, creating wildfires that move with a speed and intensity previously unseen,” said Secretary Haaland. “Funding provided by President Biden’s Bipartisan Infrastructure Law will support the Interior Department’s ongoing efforts to invest in the science and research that is needed to better understand the impacts of climate changes on wildland fire in order to better safeguard people, communities and resources. With so little room for error, we must remain steadfast in our commitment to wildland fire preparedness, mitigation and resilience.”

In Colorado, $18 million of these initial funds will be used to treat up to 10,000 acres across the Arapaho and Roosevelt National Forests and the Pike-San Isabel National Forests. These two national forests are an important source of water for the Colorado Front Range, making it a critical landscape to reduce the likelihood, intensity and size of wildfires. As part of this work, Chief Moore detailed how the Forest Service will implement the St. Vrain Forest Health Collaborative Partnership project, located just west of Heil Valley Ranch where today’s event was held.

There they discussed wildland fire preparedness and the historic investments in wildfire reduction through the Bipartisan Infrastructure Law, including the $4.5 billion provided over the next five years to help the firefighting community contend with extended fire years, extreme weather, and fires that strain staffing and resources.

Secretary Haaland and Secretary Vilsack also outlined their vision and goals for managing wildland fire in a joint memo to wildland fire leadership. In addition to the help from President Biden’s Bipartisan Infrastructure Law, the memo highlighted other investments in reducing wildfire risk, restoring ecosystems, post-fire recovery and making communities more resilient to fire – especially those communities that have been historically underserved.

The combined resources for wildland fire response across both departments include 16,700 firefighters, more than 200 helicopters, 35 single engine airtankers (SEATs), up to 23 airtankers, 360 pieces of heavy equipment and nearly 1,600 engines.

The 10-Year wildfire strategy calls for treating up to 20 million acres on national forests and grasslands and up to 30 million acres of treatments on other federal, state, Tribal, private and family lands.

Over the past 20 years, many states have had record catastrophic wildfires, devastating communities, lives and livelihoods, and causing billions of dollars in damage. More than 10 million acres – more than twice the size of New Jersey – burned each year across the U.S. in 2020, 2017 and 2015.

Under the leadership of the Biden-Harris Administration, USDA and its federal partners in the Infrastructure Implementation Task Force are working with rural communities to deliver on the promise of support for rural America.

USDA touches the lives of all Americans each day in so many positive ways. In the Biden-Harris Administration, USDA is transforming America’s food system with a greater focus on more resilient local and regional food production, fairer markets for all producers, ensuring access to healthy and nutritious food in all communities, building new markets and streams of income for farmers and producers using climate smart food and forestry practices, making historic investments in infrastructure and clean energy capabilities in rural America, and committing to equity across the Department by removing systemic barriers and building a workforce more representative of America. To learn more, visit www.usda.gov.