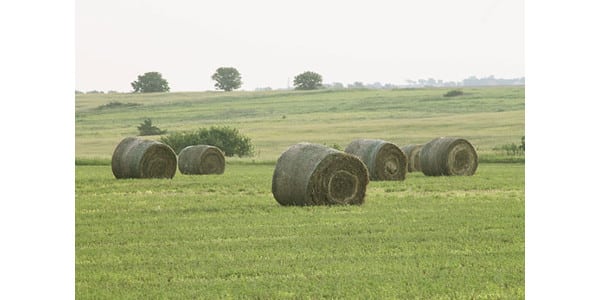 Proper storage of round bales can minimize nutrient loss. (Courtesy of K-State Research and Extension)

MANHATTAN, Kan. — It is hay cutting time in Kansas, and once all the grass is baled it must be stored for future use. Oftentimes that is outdoors, and many producers may not fully realize the nutrient loss that comes with weathering of large round hay bales stored outside, particularly in regions of the country with high rainfall.

“Thirty percent of the bale is in the outer six inches so it doesn’t take much spoilage to lose a third of the bale,” said Bob Larson, Kansas State University veterinarian, during a recent discussion on the Beef Cattle Institute Cattle Chat podcast. He added that if weathering losses extend 18 inches into the bale, 75% of the hay is affected.

To minimize those losses, Larson and veterinarian Brad White talked about ways to help producers who are unable to store their hay under a covering.

White suggested producers line large bales north to south in rows and to space the rows far enough apart to allow for quick drying of the hay after a rain.

“By lining them up north to south that allows only the north end of the row to avoid the drying effects of sunlight,” he said.

Larson said when calculating loss, producers need to remember there will be some natural loss during feeding as well as during storage.

“There is a huge difference in the amount of loss from bales stored under cover where the loss is minimal compared to the potential large loss for bales stored outside in an area with a lot of rainfall,” Larson said. “So, it is important to implement cost effective strategies to manage that loss.”

To hear the full discussion about hay storage, tune into the BCI Cattle Chat podcast.

Staying one step ahead of African swine fever