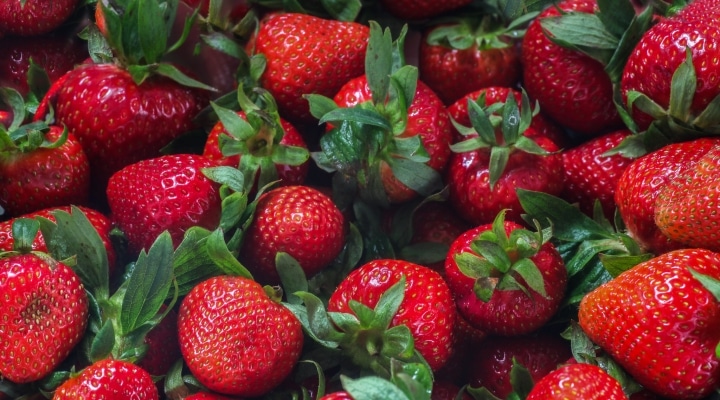 During berry harvests across North Carolina, nothing seemed normal this season. But in spite of the coronavirus closures and social distancing, Extension agents and specialists found new ways to carry out research, connect with growers and help protect farmworkers. (photo by Randy Knauf, Creative Commons/flickr.com)

RALEIGH, N.C. — During berry harvests across North Carolina, nothing seemed normal this season.

But in spite of the coronavirus closures and social distancing, Extension agents and specialists found new ways to carry out research, connect with growers and help protect farmworkers.

Here’s a look at what they learned and how it may change their work in the future.

“During the peak of the lockdown it was me going out to the field at the Central Crops Research Station in Clayton and bringing back the strawberries from the advanced trials to my home,” she says. “I would weigh the strawberries in the garage, and my daughter would help me take the measurements.”

Fernandez handled the harvest solo, rather than directing a team, to minimize the risk of spreading the coronavirus.

“It was a whole different kind of routine than what we usually do over the season.”

As a side benefit, Fernandez’s family learned more about her work.

“My daughter thoroughly enjoyed it as well,” Fernandez says. “She’d say, ‘Oh no, you’ve got to do it this way and make it more efficient.’ She was very excited to help out.”

Fernandez worked her way through the 5,000 seedlings in the field, screening them for desired fruit and plant traits and disease resistance. Near the end of the season, two of her team members, Rocco Schiavone, a research specialist, and Guillermo Chacon, a postdoc, helped with the evaluation and selection on separate days to maintain plenty of distance.

“About 2% of everything out there is good, so I have to go through 98% of them to eliminate them, based on the flavor, size or shape, and would eliminate the ones with diseases,” Fernandez says.

Although having lots of strawberries around the house sounds like a sweet perk, Fernandez and her family have high standards.

Her compost pile is well stocked now, Fernandez adds. It’s all part of the process of bringing improved berries to fruition. She’s working her way through blackberry harvest now.

The Big Chill
Blueberries began blooming in January and early February, following unusually warm weather – too early for growers to turn on irrigation systems to protect the crop. A windborne freeze Feb. 21-22 slashed yields, which are down by an estimated 50% to 60% this year.

Normally, Extension Blueberry Specialist Bill Cline keeps an eye on conditions in person. He’s a familiar farm presence, a frequent conference presenter and an organizer of blueberry field days and pruning workshops all over North Carolina.

With the Horticultural Crops Research Station in Castle Hayne closed due to the coronavirus and face-to-face meetings canceled, Cline adapted.

“We dealt with a lot of it with all this amazing technology, by people sending images to my phone or to the laptop,” he says.

He enjoyed the challenge, though he found he could use a new phone for work.

And he did his best to connect with growers and Extension agents statewide via videoconference, building on established relationships.

“I got on Zoom or the agent did, and so did all the attendees. We’ve pushed our way through,” Cline says. “But it really has curtailed work on the farm, which is unfortunate at this time of year.”

He says growers persevered through uncertainty in June. “The blueberries in North Carolina and these other small fruits have been really fortunate to fall into a window where you could still move the fruit,” he says.

He thinks the pandemic has made growers more tech-savvy, which may lead to some permanent shifts in extension work.

“I think it will change the way we operate, for the good,” Cline says. “There are things that we have learned to do in the course of this pandemic that we like and we’ll go back to doing.”

Flexibility has served him well in his career.

Interest in the health benefits of blueberries has ramped up, and Cline says we’ve been “riding the blue wave” ever since. Over the course of his career, production in North Carolina has exploded from 12 million pounds annually to as much as 48 million pounds in a good year, sold mostly as fresh berries.

Blueberry Central
Most years, half of North Carolina’s blueberry harvest comes from a single county: Bladen.

Matt Strickland, Extension field crops agent and lifelong county resident, knows the growing season means a blur of activity. This year, a shorter-than-usual harvest window and new safety and screening measures for the coronavirus made it even more pressure-packed.

Farms range from large operations that ship out truckloads of berries to small ones that sell directly to consumers.

This year, Strickland had a new question for all of his clients: “Who needs masks?”

By the first week of June, he’d handed out nearly 5,000 of 7,000 masks the county secured. “Growers were very happy for the assistance,” he says.

Both state and federal agencies designated Extension centers as distribution points because of their network of community relationships.

“No one wants an outbreak on the farm,” Strickland says. “That’s what we’re working to prevent.”

Staying in Touch
Pender County Extension Director Mark Seitz jokes that he’s been involved in Extension work for more than 50 years. How is that possible? His dad, a 4-H agent in Ohio, took Seitz to county meetings as an infant.

Since then, Seitz has gained some experience coping with crisis and change. His first job with Seneca Foods, a large canning company in New York, ended amid 9/11 layoffs.

After earning a master’s degree in agricultural business, Seitz found his way back to extension work as a commercial horticulture agent based in Jones County. Ten years ago, he was hired as Pender County’s Extension director and field crops agent.

“The relationship side of it, the face to face part of it, is the best part of extension work,” Seitz says. “The virus shutdown has limited that to some degree.”

The coronavirus may have kept Seitz off farms during the height of the season, but he’s definitely in the loop on the state of Pender County’s 1,700 acres of blueberries.

In addition to the early freeze, in late May blueberry growers had to contend with 8 to 12 inches of rain, which can make berries soft and prone to split. Sales to restaurants collapsed during coronavirus closures, which posed new challenges. More machine-picked berries meant a larger share would go to the frozen market at lower prices.

“In the conversations I’ve had with growers, it seemed like it hadn’t completely settled down and they certainly weren’t moving as many berries as they would in a normal season, but the prices seemed to have stabilized and the market volume seemed to be a little more predictable,” Seitz says. “They’ve adjusted.”

Seitz did, too, even without the in-person contact he enjoys.

“In five months this year, I’ve already had phone calls and contacts equal to everything I did last year,” he says. “Some of that is just I’m not spending as much time driving up and down the road going farm to farm. I’m spending more time on the phone talking to people.”

The coronavirus added a new degree of uncertainty to make-or-break decisions for farmers, Seitz says.

“The pressure never goes away from year to year, but then you have a virus on top of it, and it’s just chaos. It’s hard for somebody to look in their crystal ball and say, ‘OK, where am I going to be six months from now?’

“A lot of what I’ve been doing the last few months is just listening, just to pick up the phone and let them vent.”

Be safe with your fireworks this Fourth of July