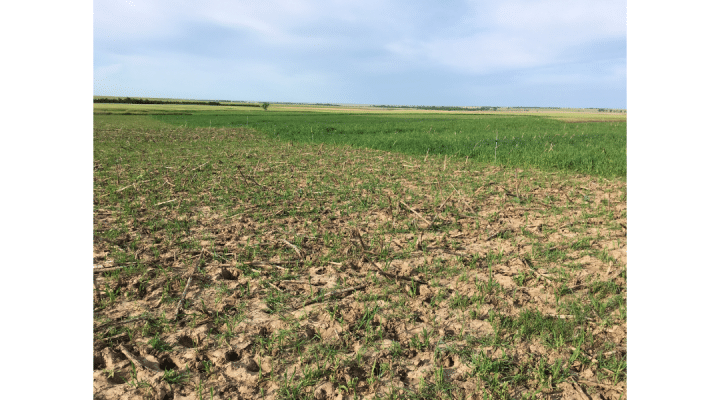 Comparing grazed and non-grazed portions of a cover crop field in Alexander, KS. This study focused on semi-arid environments like the Great Plains in the United States. (Credit: Augustine Obour)

MADISON, Wis. — Cover crops do far more than cover soils. They provide an array of benefits, such as the ability to reduce soil erosion and increase soil health. They can help attract pollinators, repel pests, turn into ‘green manure,’ or can be used as feed for livestock.

“Much of the research data we have on cover crops is from regions with high precipitation,” says Humberto Blanco, lead researcher at the University of Nebraska – Lincoln. “So, questions remain about ecosystem services provided by cover crops in drier regions.”

Some skeptics have argued that growing cover crops in more arid areas could use too much water. In turn, it could reduce subsequent food crop yields. But the research concludes that isn’t necessarily the case.

“We found that cover crops can improve most ecosystem services in water-limited environments,” says Blanco. “In the majority of cases, these improvements come without negative effects on food crop yields.”

To determine how well cover crops work in semi-arid areas, Blanco and colleagues assembled and analyzed the limited number of studies on cover crops in dry regions. They emphasized studies focusing on the semi-arid Great Plains in the United States.

The researchers looked at cover crops in connection with several ecosystem services. These included the amount of organic carbon in soils, soil microbial properties, weed management, and food crop yields, among others.

One of the key soil features the researchers focused on was soil organic carbon.

“Soil organic carbon is the catalyst for many other changes in soil properties and soil services,” says Blanco. “Soils in water-limited regions are often low in organic carbon.”

The researchers found that in dry areas cover crops increased soil organic carbon levels close to 60% of the time.

Cover crops also suppress weeds in dry areas. This is especially important because several weed species are resistant to current herbicides. The suppression of weeds by cover crops has a knock-on effect on increasing water conservation and preventing soil erosion.

“Herbicide-resistant weeds can lead to tillage of typically no-till systems,” says Blanco. “This can reduce the water-conservation ability of those agroecosystems.” Tilling can also make soils more susceptible to erosion.

Cover crops also provide food for livestock in dry areas. “Grazing or haying cover crops can improve net returns without negating benefits to soils,” says Blanco. That’s because even when grazed, a significant portion of cover crops remain on fields. Also, cover crop roots persist even when grazed, holding soils together and providing many benefits.

The study found that cover crops can reduce food crops’ yields in some cases. These instances typically coincided with intermittent drought conditions. Water availability for cover and food crops decreased during these years.

“Adapting crop rotations and cover crop use to accommodate weather conditions is critical,” says Blanco. “Farmers in drier areas may not be able to plant a cover crop every year. They can target wet years when cover crops can be successful.”