Home » Ben Beam earning his stripes with help of UK 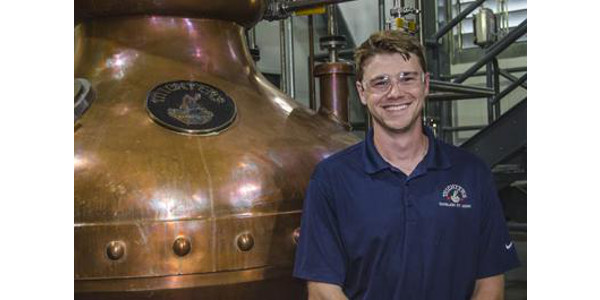 LEXINGTON, Ky. — Ben Beam is a busy guy. Between shifts as a distillery operator at Michter’s Distillery in Louisville, he puts in a lot of what he calls “windshield hours” traveling back and forth to Lexington, where he is completing the University of Kentucky’s Distillation, Wine and Brewing Studies certificate program. Yes, he’s one of those Beams.

Beam, who said he’s always had an interest in the spirits industry, was originally planning to attend law school after he graduated from Western Kentucky University. He figured he might become a lobbyist for the industry.

“I took a little bit of a turn when I found out about the opportunity at UK,” he said.

Horticulture Professor Seth DeBolt, director of the undergraduate certificate program, pointed out that a university environment is particularly applicable to workforce development.

“Every major beverage alcohol industry in the world, whether it’s cognac, Scotch whisky or wine, has workforce development and university assistance,” he said. “It’s great that the University of Kentucky is putting together classes to offer that here, where there is a thriving industry, a historical industry.”

The 12-credit-hour undergraduate certificate is designed around three tracks: distillation, wine and brewing. The multidisciplinary program includes courses and faculty from the colleges of Agriculture, Food and Environment; Arts and Sciences; and Engineering and touches on subjects that range from the sciences, such as chemistry, food engineering, viticulture, to craft writing, marketing and tourism. After taking DeBolt’s introductory course, Distillation, Wine and Brewing Science, students will hopefully get a sense as to whether wine, beer or spirits is their calling. They then can take courses offered in their specific area of interest.

Beam has taken a brewing class that focused on beer production taught by Czarena Crofcheck, Department of Biosystems and Agricultural Engineering professor, and a spirits chemistry course under Chemistry Professor Bert Lynn.

“Dr. Lynn and I made moonshine in class a couple of times. That was a hoot,” Beam said.

Due to it being made in a laboratory environment, no one could taste it, however.

Beam also took an independent study course where he did research on grain particle size as it affects the distilling process.

DeBolt estimates 20 percent of the students who enroll in the popular program, like Beam, are looking at careers in the field. Michter’s general manager, Andrea Wilson, is happy to hear that.

“I think it’s very exciting what’s happening, and I think creating a pipeline of talent, if you will, for the next generation is very important,” she said. “It’s about a total supply chain. I think it’s also about being a bit more open-minded about art and science, and knowing that people with creative minds have a role to play in this field as well. I really appreciate the University of Kentucky embracing the opportunity and creating a platform and a format for people to be educated.”

Beam worked as a tour guide at Maker’s Mark Distillery straight out of college. He enrolled in the Distillery, Brewing and Wine certificate program at UK shortly before taking a new position at Michter’s, where he does everything from receiving grain to processing, cooking, fermenting and distilling it. And cleaning. He does a lot of cleaning.

He sees the two facets of his life as complimenting each other.

“(The UK program) helped to secure my foundation, as far as how things work and why they work,” he said. “I get dirty here (at Michter’s), and then hit the books on campus. It’s a little more well-rounded growing experience, as I begin my track into the spirits industry.”

Beam is walking in some big shoes as he begins his career. He said, starting with Jacob Beam in 1795, someone in every generation of his famous family has worked in the distillery industry.

He is, however, not the first member of a “spirits” family to enroll in the certificate program. DeBolt and Lynn said many of their students come from families that are involved in distilling or winemaking in some way.

“It’s great to have people enrolled in this program who have the genuine interest in the field,” Lynn said. “Having people who have this historical background in it is even better, because they add so much to class discussions.”

Beam is having a great time earning his “stripes.”

More information about UK’s Distillation, Wine and Brewing Studies can be found at http://dwb.ca.uky.edu. 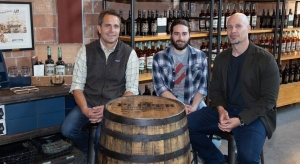 LEXINGTON, Ky, — When Cody Giles began his studies at the University of Kentucky in 2013, he said he was just going through the motions. But something clicked when he discovered the Distillation, Wine and Brewing Studies program. As a result of his hard work, Giles recently earned the head distiller position at Lexington’s James E. Pepper Distillery. “I […] 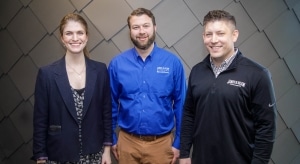