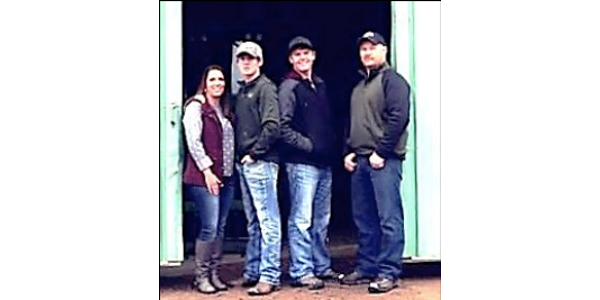 CLOQUET, Minn. — The University of Minnesota Extension and Beltrami County is proud to announce the 2019 Beltrami County Farm Family of the Year is the Frenzel Family from Blackduck, Minnesota. Terry and Misty Frenzel and sons, Slayde and Peyton work side by side on the farm.

The Frenzel Family Farm originated in 1970 by Terry’s father, Melvin with cow/calf pairs providing the backbone of the operation. After Melvin’s passing in 2003, Terry took over the farming and the tradition continues with a cow/calf and background business.

Today, the Frenzel’s have around 100 cow/calf pairs. Calves are weaned in the fall and backgrounded until late January when they are sold. They raise small grain during the summer, which is used in the background stage. The Frenzel’s use a process for forage known as baleage and wrap their round bales for a better quality product for their animals.

Misty works full-time on the farm and is involved with all aspects from animal care to fencing. The younger Frenzel’s, sons Peyton and Slayde are learning the trade in a “hands on” style. In 2003, Terry started Frenzel Fertilizer, Inc., an agronomy and feed retail store. After 10 years of ownership, Terry sold the business to Blackduck Co-op Ag Services and has continued as their agronomy manager. Misty keeps the farm running smoothly during Terry’s busy time of the year at the Coop.

Terry is the Assistant Fire Chief of the Blackduck Fire Department. He is also the Langor Township Supervisor. He is a past member of the Beltrami County Fair Board.

The Frenzel’s joined farm family honorees from across the state to be recognized in ceremonies on Thursday, August 8 at the annual Minnesota Farmfest on the Gilfillan Estate near Redwood Falls. A local recognition event is also being planned during the Beltrami County Fair.

Get the most pounds from your pigs at market

Farm Family of the Year