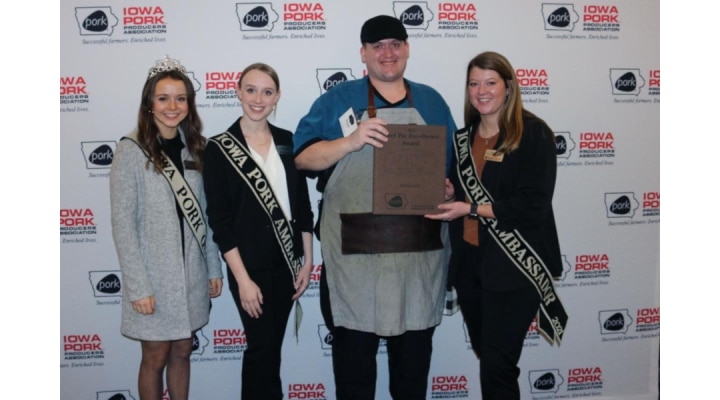 CLIVE, Iowa — Using pork meatballs to recreate a Mexican street taco won over judges at this year’s Taste competition. The event, formerly known as Iowa Taste of Elegance, is held annually at the beginning of Iowa Pork Congress week.

Myers is a corporate chef for Healthcare of Iowa, a company that operates senior living facilities throughout Iowa. For the Taste competition, his Albondigas Al Pastor incorporated the flavors of tacos al pastor—a dish traditionally made with marinated pork shoulder on a corn tortilla.

According to judge John Andres, the variety of textures, flavors, and cooking techniques “made for a very interesting use of ground pork, enriched by some fun accompaniments.” Andres is director of the Iowa Culinary Institute at Des Moines Area Community College in Ankeny.

Myers received $1,000 and a plaque in his effort to prepare the top entrée in a field of seven chefs.

The judges selected Aaron Holt of Doolittle Farm in Story City for second place, or Superior Chef. Holt also received the People’s Choice award by those who attended a tasting reception. Holt prepared Homemade Italian Sausage Meatballs with White Cheddar Polenta and Crispy Shallots. He received a plaque for each award and a total of $750.

Viktoria Grochut, of Rockwell City, was designated Media’s Choice for her Sausage Wellington. The award, selected by current and former news reporters, also included a plaque and $250. Grochut is the head chef at Cattlemen’s Steakhouse in Sac City.

Taste is a Pork Checkoff-funded culinary competition designed to inspire innovative and exciting ways to menu pork in restaurants. The event brings together talented chefs from across the state, and IPPA provided each with a $200 stipend to offset the cost of the pork.

IPPA holds additional opportunities for chefs throughout the year; if interested in learning more, contact Sutter at 800-372-7675.