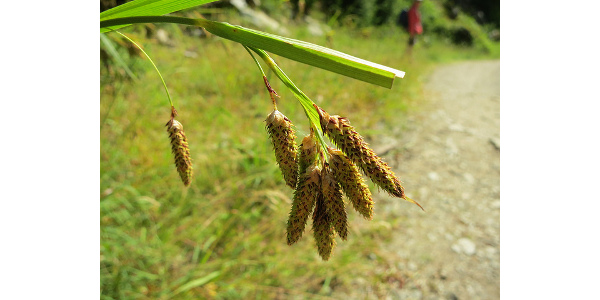 Stockpiling fescue saves time and money by reducing the need to feed hay.

Fescue, the No. 1 forage in Missouri and across the Fescue Belt, remains popular because of its persistence, resistance to insects and disease, and long growing season. Its waxy cuticle keeps its leaves green while growth slows after mid-October, making it the most suitable forage for stockpiling in Missouri.

Producers should remove cows from fescue pastures by mid-August, he says. Then fertilize with low rates of nitrogen. Let the pasture grow. Begin grazing when hay and pasture run out. Stockpiled fescue is least toxic in late winter.

Toxins peak in spring and fall

Research from several universities shows that tall fescue is as toxic in fall as it is in spring, Roberts says. In Missouri, ergovaline concentrations peak in June and then spike again in October-November.

“If you want healthy animal production, you must manage alkaloids,” he says. “Health and production problems occur because of these two peaks.”

Use incremental alleviation to reduce toxins

Proper management of tall fescue, which differs from other types of fescue, is critical to herd health and profits.

The only silver bullet for fescue toxicosis is a novel-endophyte tall fescue. But many people continue growing Kentucky 31 fescue. Roberts advises producers to manage with “incremental alleviation.” In other words, use multiple practices at the same time.

A single practice may provide partial relief, but it will not be enough to prevent health problems in animals. “You must do all at the same time to achieve acceptable performance,” Robert says.

Killing the old fescue and reseeding a new variety of novel-endophyte fescue can solve problems with toxic fescue, says Roberts.

New varieties cut losses and improve gains. Roberts and other forage experts across the Fescue Belt teach how to seed new varieties at schools offered by the Alliance for Grassland Renewal. For more information, visit GrasslandRenewal.org.

U.S. Court of Appeals rules in favor of Farmobile