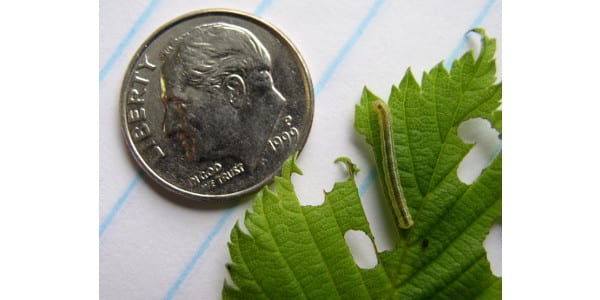 A caterpillar of the fall cankerworm chews on a leaf. (NDSU photo)

FARGO, N.D. — Cankerworm populations have been increasing in North Dakota for the past two years, and insect and forestry experts expect another population boom in 2020.

Caterpillars of these insects defoliate a number of deciduous tree species, including ash, elm, linden and boxelder.

Pest management is most effective when cankerworms are small, less than 1/2 inch long. When mature, caterpillars reach about 1 inch in length.

“Cankerworms are best controlled between about 148 and 280 growing degree days, using a base temperature of 50 F,” says Joe Zeleznik, NDSU Extension forester. “This means that we can use the mathematical model that has already been developed for corn growing degree days.”

Confirming the presence of cankerworms before beginning treatments is important because applying treatments at the wrong time or if the insect pest isn’t there would be a waste of time and money, Knodel says.

“These bacterial insecticides are very effective against caterpillars and safer for beneficial insects, wildlife and us,” she says.

“Caterpillars will feed for about four to six weeks, and defoliation usually isn’t noticed until it’s too severe and too late to apply effective treatments,” Zeleznik says. “Therefore, begin scouting when your location is near the degree-day threshold.”

For more information on cankerworm biology and pest management, check out the NDSU Extension publication “Cankerworms in North Dakota” (E999) at https://tinyurl.com/CankerwormsND.