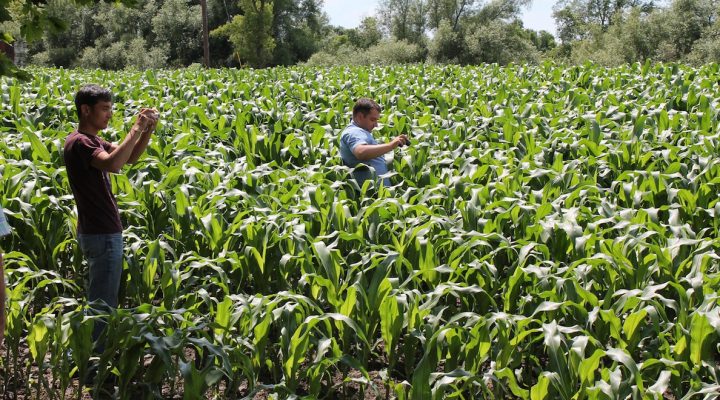 Biocontrol nematodes are microscopic worms that eat the larva of alfalfa snout beetle, thereby reducing beetle populations to less damaging levels in alfalfa crops. Shields says his research in Northern New York indicates the nematodes persist, even increase, at effective populations over multiple years even when the field is rotated to corn or soybeans for 4 to 5 years.

‘We are seeing an increasing biocontrol nematode population when the field is rotated to corn, strongly suggesting the nematodes are reproducing in corn rootworm which is attacking the corn. An associated study initiated in 2014 at the Cornell Musgrave Research Farm demonstrated nematodes applied there persisted in continuous corn until 2016 at a level to completely protect non-Bt rootworm corn at the same level as rootworm Bt corn,’ Shields notes.

The farmers who prioritize on-farm research for Northern New York Agricultural Development Program grant funding want to know if the impact of biocontrol nematodes on corn rootworm may be significant enough to eliminate the need for Bt-rootworm corn seed or soil insecticide.

Bt corn seed is genetically modified to express one or more proteins from the bacterium Bacillus thuringiensis that is poisonous to certain insect pests and is used in organic production systems.

The potential for corn rootworm resistance to Bt corn is increasingly a concern for agricultural producers as is the cost of Bt corn seed, making the potential use of biocontrol nematodes to manage corn rootworm particularly timely.

Grant funding from the farmer-driven Northern New York Agricultural Development Program in 2016 established research plots to evaluate the effectiveness of biocontrol nematodes on corn rootworm at Morning Star Farms in Smithville, NY. Results are not expected until the end of the 2017 growing season as corn rootworm becomes a pest of corn starting in year 2.