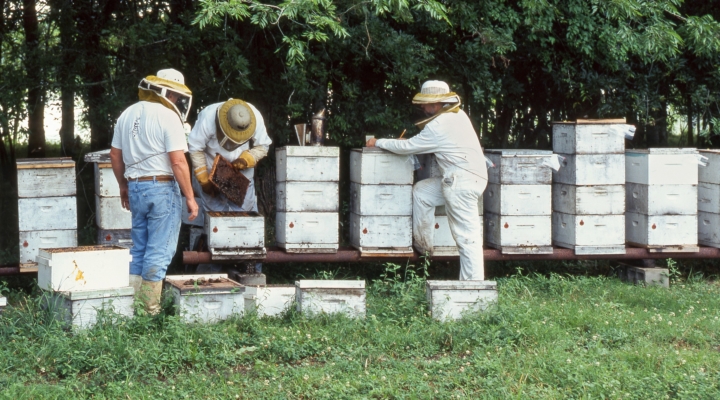 The stress of cold temperature may play a role in colony losses during shipping. (Courtesy Photo)

FARGO, N.D. — Cold temperatures inside honey bee colonies may cause colony losses during and after long-distance hauling, according to a preliminary study by Agricultural Research Service (ARS) scientists.

Every year almost 2 million honey bee colonies—nearly two-thirds of the managed colonies in the United States—are loaded aboard semi-trailers and shipped across the country multiple times to pollinate crops like California almonds.

But within days of arrival, some of these colonies will have few if any honey bees left to visit almond flowers, to provide essential pollination services to California’s 1.3 million acres of almond orchards.

“We found that less robust colonies—those that have fewer than 10 frames of honey bees and larvae when loaded onto trucks—cannot maintain the temperature inside the hive and are subjected to cold stress,” said Dacotah Melicher, a post-doctoral researcher with the ARS Bioscience Research Laboratory in Fargo, North Dakota.

Smaller colonies are more likely to fail and fail faster, and many lose almost all of their bees within days of arrival. Robust colonies with 10 or more frames were able to maintain stable temperatures and populations.

Honey bee transporters often worry about colonies overheating during shipping, which can cause a colony to die very quickly. However, chilling can be as damaging but less obviously. If brood—bee larvae—are chilled, it can result in developmental abnormalities when they emerge as adult bees. This could be the cause of smaller colonies failing within a few weeks of being shipped.

Colonies with fewer than 10 frames just may not have the numbers to allow the colony to thermo-regulate well enough to prevent chilling.

When honey bee boxes are loaded onto semi-trailers, they are oriented with the hive box openings inward toward a central aisle or outward toward the highway. The aisle helps prevent overheating, but may cause air turbulence that can affect hive temperature if the outside air temperature is low.

Internal colony temperatures also varied significantly depending on where they were located on the trailer. Colonies near the front and the back of the trailer and the colonies facing the central aisle showed the greatest loss of temperature, but more hives need to be monitored to see if location matters.

In addition to measuring colony temperatures, the scientists also profiled genetically mediated responses—known as gene expression—at departure, on arrival and after a recovery period of three weeks to identify honey bees’ internal reactions to the stress of being trucked.

What the researchers found was that, after the recovery period, the activity of genes that support more disease resistance and those that respond to cold stress as well as genes that guide aggressiveness all had decreased significantly as the hive rebounded from being transported. At the same time though, the bees’ genes involved in producing antibiotic peptides had increased activity, possibly as a way for the bees to prepare to fight off new potential bacterial infections to which the stressed hive may be more vulnerable.

“Before we can really pinpoint the greatest stresses, we need to measure honey bee responses to other factors that occur during long-distance trucking such as vibration, air pressure, diesel exhaust, and the stress of confining the honey bees within the boxes during transport. It’s likely that some factors are causing more stress than we expect, but there might be inexpensive solutions that could help beekeepers save hives,” explained Melicher.

EPA has 90 days to justify use of pesticide