Home » Bees and pesticides in the garden 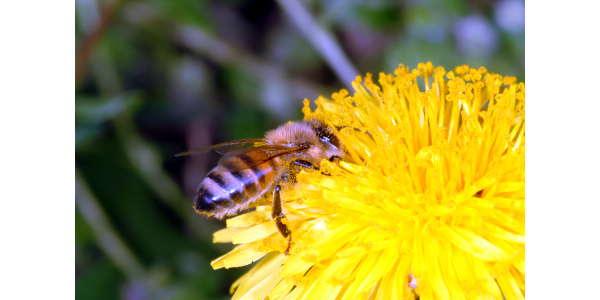 LEXINGTON, Ky. — I received an email from a backyard beekeeper asking how they can avoid problems to bees when using pesticides in the yard. Overwintering losses of honey bee colonies increased in 2006 and remain at unacceptable levels, but at the same time, there has been a huge increase in beekeeping by hobbyists. This article addresses a few steps which can be taken to minimize hazards to bee when using insecticides to manage other insect pests in the garden.

There are two main potential ways that the bees could be harmed when you spray your trees, vegetables, flowers, and lawn in your yard.

The first is: bees can be harmed is through spray drift when the application moves toward and over the colonies themselves. Many of our documented bee kills with pesticides have been due to pesticide drift where bee colonies were located in proximity to areas been treated. So as a long term strategy, try to locate bee colonies in areas that are less likely to be treated with insecticides, or plant vegetation around them to serve as a buffer to reduce spray drift reaching the colonies. Avoid spraying pesticides on windy days, especially on days where the winds may carry spray drift in the direction of the colonies. Many pesticide labels provide guidance on avoiding spray drift. In addition, spraying after 6:00 pm or when the temperature is below 55˚F also helps because the foraging of bees is greatly reduced.

The second main route to injuring honey bee colonies with pesticide sprays is: by contaminating their food or water supplies. As a general rule of thumb, you shouldn’t spray plants in bloom with an insecticide (in fact, many pesticide labels expressly prohibit this) or in areas where pollinators are foraging.  “Plants in bloom” covers more plants than just the ones you planted or may be interested in.  This includes weeds that may be flowering. An example may be dandelions or flowering clover underfruit trees in the yard. The easiest way to deal with flowering weeds, is to mow or pull them before you spray.

Bees need a constant source of water to survive; you must be very cautious to avoid contaminating these sources with pesticide sprays or other applications. Beekeepers may locate their watering stations for bees away from areas that are likely to be sprayed with pesticides.

The final way to limit damage to the bees, is to only spray if you need to and to use materials that are effective, but also least toxic among your choices. Pesticides are just one strategy to prevent pest damage and should only be used after we have exhausted cultural, physical, and biological control options.  When pesticides are used, they need to be timed such that they are applied when most effective, which can reduce the number of applications, and when pests are at a level to warrant the need for control. Different insecticides vary widely in their toxicity to honey bees and other pollinators and there is often several different types to choose from to control a particular pest. Products containing Bt or Bacillus thuringiensis are among the insecticides least toxic to honey bees.

Legislation to help feed the hungry