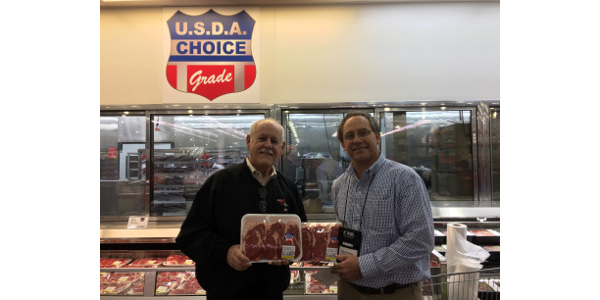 AMES, Iowa — The Iowa Beef Industry Council (IBIC) recently embarked on an Iowa trade mission to South Korea on February 11-18, 2017. The beef and pork schedule was coordinated through the U.S. Meat Export Federation (USMEF). The projected expansion of U.S. chilled beef exports to South Korea is set for record levels. In 2016, U.S. beef exports grew by 31% in dollars received and 42% in total shipment weights. In total, 179,280 metric tons valued at $1.059 billion were exported to South Korea. The growing middle class of Korea has a demand for beef, especially beef short ribs for their Korean BBQ style meals.

Daryl Strohbehn, Boone, and Dave Rueber, Luxemberg, Iowa beef producers and members of the IBIC board of directors, attended the meat trade mission on behalf of the beef checkoff. The trip began with a tour of the cold storage and processing plant at Kyunwoo Foods and Haesung Provision in South Korea to better understand the Korean market.

The next phase of the trade mission was to the Costco Kwangmyung warehouse. Costco, the largest importer in the region, recently transitioned two of their thirteen warehouses from Australian beef to 100 percent U.S. chilled beef. The remaining eleven warehouses will be converted during May. The regaining of the Korean imported chilled beef market is a milestone for U.S. beef producers.

“The retail market is vital for U.S. beef. Costco’s announcement to move from 17% to 100% U.S. beef in their stores is exciting for cattle producers,” said Rueber. “USMEF has been working on this for 13 years. This will result in a 15,000 metric ton increase in beef purchases this year.”

“As beef producers, we cannot become complacent, we must continue to focus on building long-term beef demand and being aware of future opportunities,” stated Strohbehn. “As an industry, we have to continue listening to what our consumers want, including our overseas customers.”

The Iowa trade mission participated in the USMEF Spring Seminar. This event attracted more than 200 people in the meat industry including importers, processors, distributors, retailers, foodservice and government to learn about U.S. meats. In addition, they attended a U.S. meat cookbook launch event. Korea has one of the most advanced social media networks of any country. USMEF brought in key bloggers and restaurant owners to explore new processed meats from the U.S.

Beef checkoff dollars are invested in USMEF, that share the positive attributes of U.S. beef with international consumers through messaging focused on the safety and quality of U.S. beef, develop the market for new items and preparation techniques/trends (e.g. American BBQ) within international countries, and maximize the impact of market access initiatives. USMEF staff identify areas with the highest potential for growth and establish unique strategic objectives in each market.

“I was impressed by the professionalism, the networking skills, and expansion for U.S. beef in South Korea,” noted Rueber. “The beef checkoff’s support of USMEF is essential.”

The trade mission was coordinated by Iowa Economic Development Authority with representatives from the Iowa Beef Industry Council, Iowa Pork Producers Association, beef processor and pork exporters. Checkoff investments with USMEF assisted with many of the in country meetings. The mission was partially funded by the Iowa Beef Industry Council, the Beef Checkoff Program in Iowa.

Cover crop use in beef production

Dairy Design Workshops to be held this spring
February 26, 2020