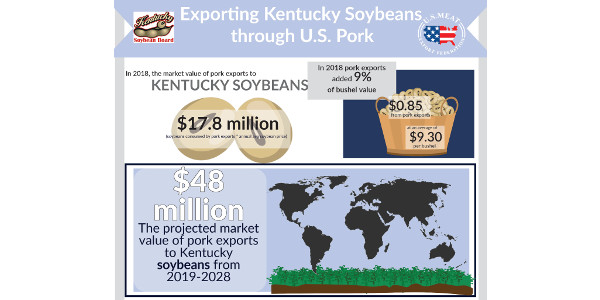 Among new information included in the latest report are statistics that point to the value of red meat exports to U.S. soybean producers. According to WPI, the market value of pork exports to the soybean industry in 2018 was $783 million. WPI’s updated study shows that without red meat exports, U.S. soybean farmers would have lost $3.9 billion last year and U.S. corn growers would have lost $5.7 billion.

The updated report includes a projection of domestic feed use impacts based on both the long-term 10-year baseline projections for meat exports, as well as a special analysis on the critical importance of the proposed U.S.-Japan trade agreement. USMEF has also prepared state-specific statistics on the value of red meat exports to the top 15 soybean states and top 10 corn states.
“The World Perspectives study has been a very useful tool in quantifying the importance of red meat exports to our corn and soybean member organizations,” said USMEF President and CEO Dan Halstrom. “Results of the study and the subsequent updates demonstrate that maintaining global market access for U.S. beef and pork is critical to continued growth and to the continued value that meat exports bring to corn and soybeans.”

“When the original study came out a few years ago, it gave us a good look at the value of U.S. beef, pork and lamb exports to corn and soybean farmers,” said Dean Meyer, a corn, soybean and livestock producer from Rock Rapids, Iowa. Meyer, a member of the USMEF Executive Committee, noted that the study continues to support the fact that exporting red meat drives demand for livestock, in turn driving demand for livestock feed.

“The updated study offers a fresh look at corn and goes a little deeper into soybean meal and what red meat exports mean for soybean growers. As grain farmers, we are aware that meat exports add value by increasing the volume of soybean meal and corn used to feed cattle and hogs, but the numbers in this study provide a clear picture of just how important those exports really are,” said Meyer.

USMEF and the National Corn Growers Association initially commissioned WPI to quantify the impact of U.S. beef and pork exports on corn use and value in 2016, using 2015 data. Record-setting growth in red meat exports since 2016 – along with an uncertain global trade climate that has developed since the original study – led USMEF to request updates. Using final 2018 data and new 2019 to 2028 USDA baseline projections, WPI updated its analysis of red meat exports’ impact on corn in 2018 and expanded the analysis on the value of pork exports to soybeans.

HIGHLIGHTS FROM THE UPDATED WPI STUDY INCLUDE:
• Since 2015, meat exports represent the fastest growing category of corn and soybean meal use.
• In 2018, exports accounted for 14.6 percent of total U.S. beef production and 25.7 percent of U.S. total pork production, and accounted for 459.7 million bushels of corn utilization – with a market value of $1.62 billion at the year-average market price – and 2 million tons of soybean meal disappearance, which is the equivalent of 84.2 million bushels of soybeans with a market value of $783 million.
• It is estimated that in 2018 beef and pork exports added $0.39 to the average 2018 corn price of $3.53/bushel. Similarly, it is estimated that pork exports added $0.85 per bushel to the average 2018 soybean price of $9.30/bushel.
• Since 2015, one in every four bushels of added feed demand for corn was due to beef and pork exports and one in every 10 tons of added feed demand for soybean meal use was due to pork exports.
• Over the next 10 years, meat exports are forecast to generate a projected $30.8 billion in cumulative annual market value to corn and soybeans based on USDA’s long-term forecast for crop prices. 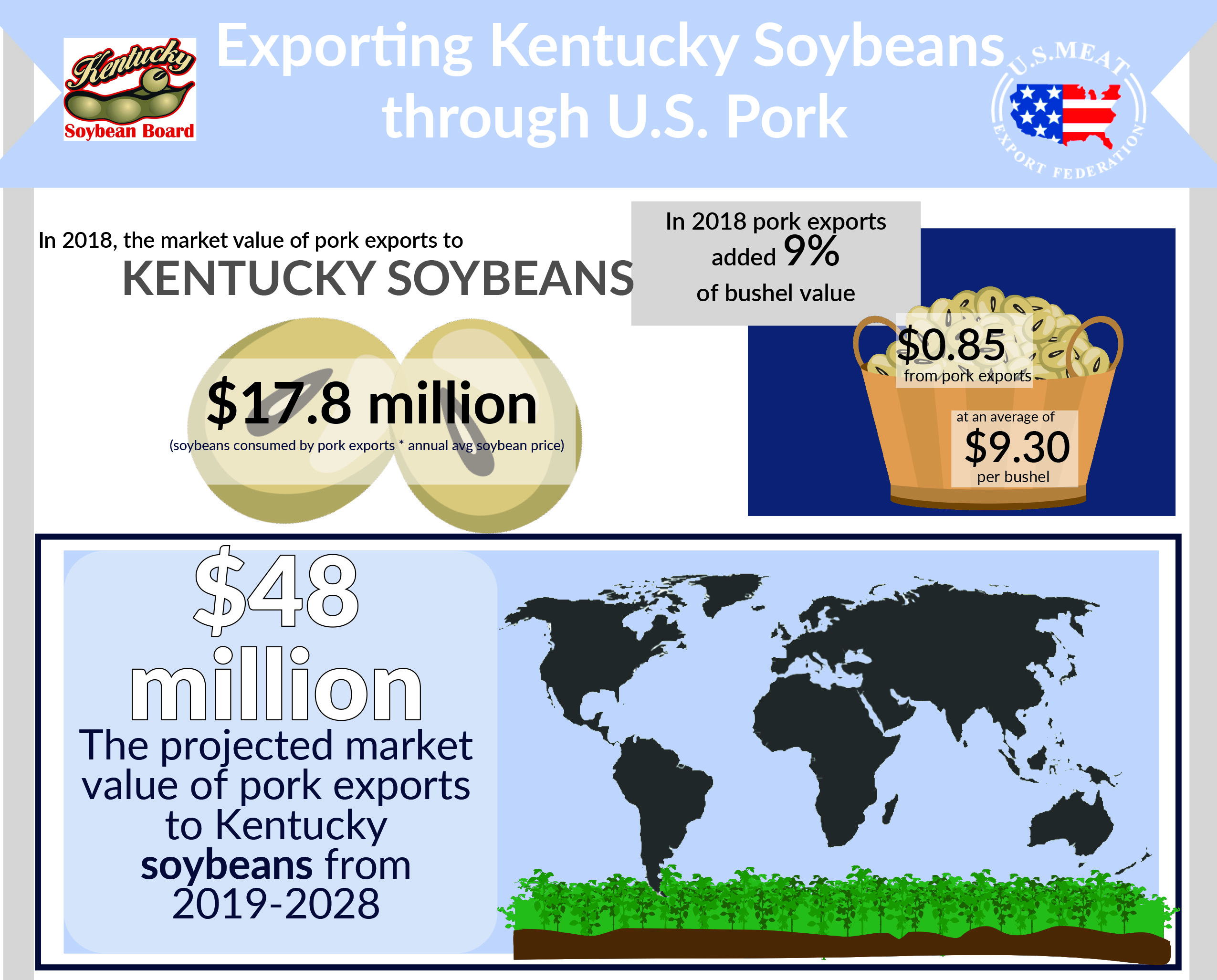