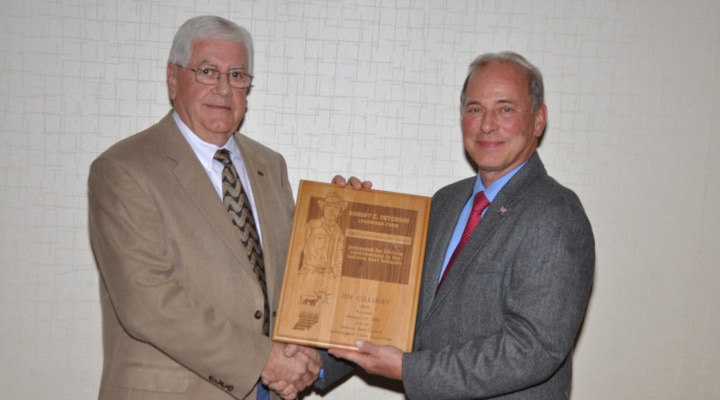 INDIANAPOLIS — The Indiana Beef Cattle Association (IBCA) honored the state’s top cattlemen during at awards banquet at their Annual Convention in Indianapolis on Saturday, Jan. 25 at the Sheraton North, Keystone Crossing.

At the awards banquet, the IBCA leadership presented special recognition awards to Ron Manning of Macy and Rick Seehase of Logansport for their years of service to the industry. The 2019 Friend of the Industry Award went to Phil Reid of Fowler. Well known among the beef community as a long-time advocate and supporter, Phil serves as the state coordinator for the Beef Quality Assurance Program.

To honor cattlemen who possess beef management skills and leadership abilities, the IBCA awarded the 2019 Young Cattleman of the Year to Jordan Eggersman of Brownstown. Jordan has worked hard to improve the quality of the herd through embryo transfer and artificial insemination and is continuously looking for ways to improve daily efficiencies.

The prestigious Outstanding Cattleman of the Year Award was presented to Tom Farrer. A 1978 Purdue graduate, Tom and his wife Lisa operate Farrer Stock Farms in Royal Center. Tom is a member of eight national cattle breed associations, the Indiana Pork Board, a 4-H leader for 40 years and a 2018 inductee into the Indiana Livestock Breeders Hall of Fame.

The most esteemed award each year is the coveted Robert C. Peterson Lifetime Achievement Award. Jim Gillooly of Washington was the recipient of the 2019 award. Jim and his wife Jane own Colbert Farms which is a Purebred Angus and Polled Hereford operation. One of the founders of the IBCA, Jim sat on the committee when it was formed in 1973 through a merger of the Indiana Cattlemen’s Association and the Indiana Livestock Feeders Association. Jim also served as one of the co-chairs for the very first Hoosier Beef Congress in 1987.

The Indiana Beef Cattle Association congratulates all the award recipients and is proud to honor them for their work and commitment to the Indiana beef industry and agriculture.