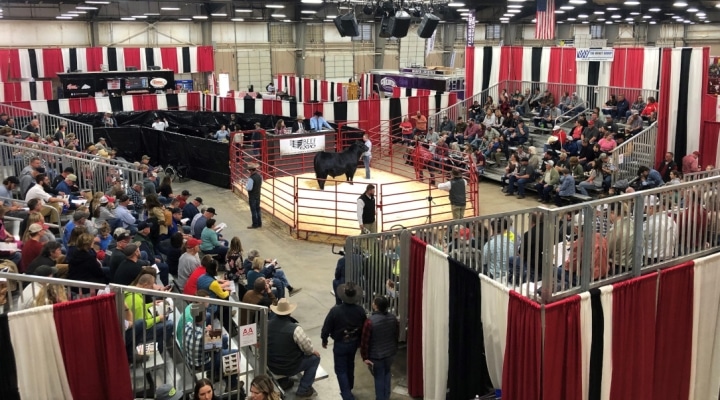 MARYSVILLE, Ohio — The 34th Ohio Beef Expo was held March 17-20 at the Ohio Expo Center in Columbus, Ohio. The Expo, hosted by the Ohio Cattlemen’s Association (OCA), is the premier event for Ohio’s beef industry covering many facets of the beef world with seedstock shows and sales, a trade show, a competitive junior show and much more all in one place.

“There aren’t many states with a Beef Expo quite like ours here in Ohio,” said Shane Riley, Expo chairman. “We have a junior show program that is envied across the country and our breed sales and trade show are something we are proud of. Once someone attends the Ohio Beef Expo, they make plans to come back each year after and we just keep growing.”

The Expo kicked off Thursday with a full trade show featuring many eager exhibitors selling everything from cattle chutes to farm insurance. Following the opening of the trade show was The Social event where producers and industry affiliates gathered to network and participate in OCA’s Political Action Committee (PAC) auction where over $9,100 was raised.

In addition to the Murray Grey show, five breeds hosted shows or parades on Friday to display cattle being sold in the sales. The Genetic Pathway, located in the Show Coat Solutions Breeds Barn, showcased the industry’s most popular sires and donor prospects on display throughout the weekend.

Friday was also host to the annual Internet Feeder Cattle Sale hosted by United Producers Inc. that offered consignments of uniform packages of feeder cattle sold off the farm. This year’s sale included 24 lots with over 1,800 head of steers, heifers and beef on dairy cattle.

The Judging contest, co-hosted with the Ohio State University’s (OSU) Livestock Judging Team, was back after being postponed for two years with over 460 youth participants from Ohio and surrounding states traveling to judge six classes of cattle, answer questions and evaluate breed data sheets.

Two recipients were honored with the Friend of the Expo Award for their dedication and contributions to the Expo’s success over the years. J.L. Draganic, Wakeman, Ohio, and Pam Haley, West Salem, Ohio, received the 2022 honors for serving the Ohio Beef Expo for over a decade.

Sale and show results will be available soon at www.ohiobeefexpo.com along with a complete list of the event’s sponsors. The dates for the 2023 Ohio Beef Expo are March 16-19.