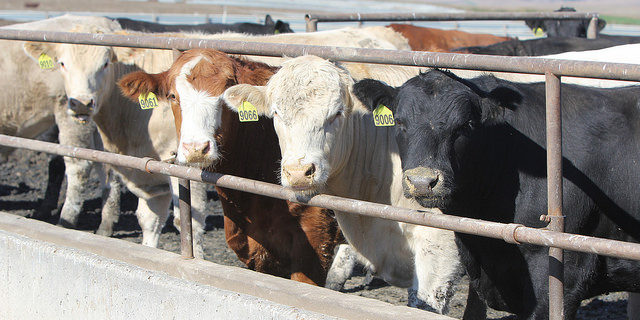 A Florida native, Burkholder moved to Nebraska with her husband in 1997 to run a family feed yard that had been in her husband's family since the 1970s. Since then, the mother of three started a successful blog entitled "Feed Yard Foodie" and works for Progressive Beef to ensure that its supply chain is producing high-quality, sustainable beef. (Iowa Cattlemen's Association via Flickr)

CENTENNIAL, Colo. (PRNewswire-USNewswire) — The National Cattlemen’s Beef Association, a contractor to the beef checkoff, has selected blogger and cattlewoman Anne Burkholder as the recipient of the inaugural Advocate of the Year award. The Advocate of The Year is selected by NCBA and state checkoff staff as the standout advocate amongst the 12 monthly award winners.

A Florida native, Burkholder moved to Nebraska with her husband in 1997 to run a family feed yard that had been in her husband’s family since the 1970s. Since then, the mother of three started a successful blog entitled “Feed Yard Foodie” and works for Progressive Beef to ensure that its supply chain is producing high-quality, sustainable beef.

While many beef advocates grow up with an agricultural background, Burkholder grew up in Palm Beach County, Florida, a self-proclaimed jock, and attended Dartmouth University where she majored in psychology. This unique perspective allows her to relate to consumers who may not be familiar with beef production.

“Managing a feed yard for 20 years inspired me to learn to identify and fill meaningful gaps. With thousands of cattle relying on me each and every day, recognizing if an important gap existed between the care that I offered and what the animal needed was absolutely critical for good welfare. This same philosophy of working to ‘fill the gap’ extends to all of the areas of my life including beef advocacy,” explains Burkholder. “A gap clearly exists between the truth of how beef is raised and the general consumer knowledge of the beef industry. As someone actively engaged in caring for cattle and raising beef, it is my job to help fill that gap with truthful information.”

Burkholder’s passion for communicating with consumers led her to become an early graduate of the Masters of Beef Advocacy (MBA) program. She has taken that training, paired with her firsthand experience, to another level over the years partnering with the beef checkoff as a spokesperson. She has participated in national media interviews and high-profile panel discussions to share beef’s positive story with consumers around the country.

“Feed Yard Foodie is a natural extension of me — It is an “Anne Gate” that creates appropriate transparency as I try to bridge the seemingly unending chasm between urban and rural America. I truly believe that ‘together we are stronger’ and my advocacy efforts focus on finding common ground with those that were not granted the blessing of living on a farm,” said Burkholder.

Burkholder is no stranger to awards. She was awarded the BEEF Magazine Trailblazer award in 2014, she was named to Vance Publishing’s 40 under 40 in agriculture in 2013, and in 2009, she was awarded the Beef Quality Assurance Producer of the Year award.

About the Beef Checkoff

The Beef Checkoff Program was established as part of the 1985 Farm Bill. The checkoff assesses $1 per head on the sale of live domestic and imported cattle, in addition to a comparable assessment on imported beef and beef products. States may retain up to 50 cents on the dollar and forward the other 50 cents per head to the Cattlemen’s Beef Promotion and Research Board, which administers the national checkoff program, subject to USDA approval.

About Masters of Beef Advocacy (MBA) Program
The checkoff funded MBA program was launched by the National Cattlemen’s Beef Association, a contractor to the beef checkoff, in 2009. The free, online program is composed of five courses and is designed to help graduates engage in conversations with consumers about how beef is raised, from pasture to plate, and answer their questions about issues like animal care, safety, nutrition, and sustainability. In 2015 the lessons were re-vamped and MBA 2.0 was released. The program now has more than 10,000 graduates. Twenty-nine of those graduates have gone a step further and participated in in-depth advocacy training at NCBA headquarters to become Top of the Class graduates.