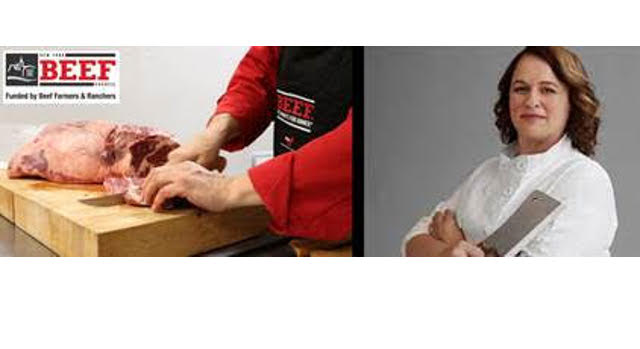 Food bloggers from throughout New York, with the assistance of NYBC in purchasing a strip loin sub-primal, received the first-ever online butchery lesson from master butcher Kari Underly. (Courtesy Photo)

ROME, N.Y. — Six social influencers attended a virtual “BEefTogether” Meat Retreat, thanks to a partnership between the New York and Iowa Beef Councils.

This virtual evening event focused on at-home beef butchery and cookery. Food bloggers from throughout New York, with the assistance of NYBC in purchasing a strip loin sub-primal, received the first-ever online butchery lesson from master butcher Kari Underly. Underly is the owner of Range Meat Academy and author of Art of Beef Cutting, a James Beard nominated book. Using two video cameras, Kari led the cutting of the sub-primal showing influencers how to create strip steaks, strip roasts, and petite strip filets. In addition, she discussed how to utilize all meat and fat scraps to ensure using practically the whole sub-primal.

“The versatility of the strip loin makes for great discussion and lessons in both cutting and cookery,” added Jean O’Toole, Executive Director of New York Beef Council. “With the new knowledge from today’s event attendees understand how this one cut can be further broken down to and utilized for multiple great eating experiences.” Post evaluations of the event revealed that 100% of attendees would recommend this opportunity to their colleagues and all rated the experience a 5 out of 5 start rating!

Social influencers were asked to document their learnings and create a recipe utilizing the meat they cut during the event. Initial social analytics show the reach to be over 12,000 followers, over 15,000 impressions and nearly 1,000 engagements with the bloggers’ posts. The video of the learnings from the event can be found on the New York Beef Council’s YouTube page so you can cut your own beef too!

Cutting meat in person is a challenge, but cutting meat virtually takes a lot of patience! I think I would’ve double checked/leaned on Kari a bit more if I were in person. But, in a way this then just gave me more confidence because I had to move forward (and I knew I could go off mute and ask a question if I felt like I really needed to).

The NYBC’s goal is to serve as the premier source of beef information to the influencers in our region. Events such as this allow the Beef Checkoff to engage directly, even in a virtual format, with influencers and bloggers to highlight beef’s versatility, quality and taste. Attendees reflected upon the event by saying, “I never thought about doing those smaller ‘filet mignon’ type steaks. Such a great idea because so often traditional size steak is too big for a lot of guests.” Also, “My favorite part and biggest takeaway was the emphasis on using every part of the beef, even the scraps.”

The Beef Checkoff Program was established as part of the 1985 Farm Bill. The Beef Checkoff assesses $1 per head on the sale of live domestic and imported cattle, in addition to a comparable assessment on imported beef and beef products. States retain up to 50 cents on the dollar and forward the other 50 cents per head to the Cattlemen’s Beef Promotion and Research Board (CBB), which administers the national Beef Checkoff program, subject to USDA approval. Consumer-focused and producer-directed, the CBB and its State Beef Council partners are the marketing organization for the largest segment of the food and fiber industry.

The good and bad of beaver dams for stream channels and wetlands
September 26, 2021