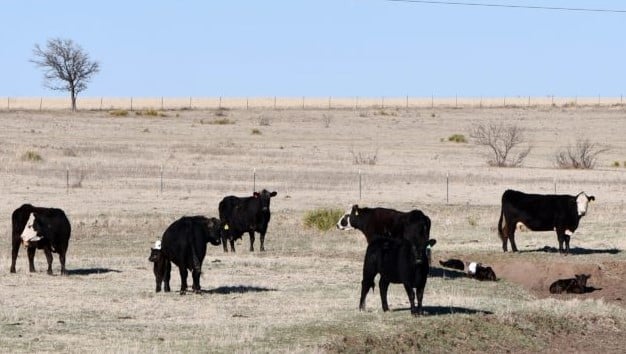 COLLEGE STATION, Texas — Matching cattle to the land available to graze and the nutrition it offers is critical in optimizing production in an operation.

Jason Smith, Texas A&M AgriLife Extension Service beef cattle specialist, Amarillo, who is frequently contacted to help with problems cattle operators are having, was a speaker at the recent Southwest Beef Symposium in Amarillo.

“More often than not, as a nutritionist, I’m called in to fix a situation where the cattle and environment are not matched,” Smith said.

He explained how cattle selection and the operation’s environment feed off one another. Without balance, one will take away from the other. It’s important to know both what the cattle will need as well as what the land can offer.

Smith also stressed how important it is to keep records to document progress and problems.

If she’s going to be kept as a replacement heifer, she must have been healthy and performed at an acceptable level as a calf, become pregnant during the breeding season, calve without assistance by her second birthday, and then do it again the next year, he said.

“Those should be the bare minimum criteria.”

Smith also said that if she wants to continue to be employed in the herd, she needs to be able to do all that while maintaining acceptable body condition with little to no protein or energy supplementation. And then, she must continue to wean a healthy, desirable calf that meets expectations year after year.

“If she can’t do those things, she doesn’t fit your environment, and will hinder your ability to move forward.”

Consider more than one quality when making selections

“We often find ourselves focusing too much on output, without considering what else might come along for the ride,” he said.

Selecting only for weaning weight or yearling weight without considering other growth- or size-related traits will cause mature cow size to increase, which also increases forage intake and total nutrient requirements.

“That doesn’t mean we can’t use genetics to select for improvements in weaning weight, it just means that we need to divergently select the genetics that will allow for an improvement, without increasing cow size. The same concept applies to milk production, although that improvement is often less rather than more.”

“As cow size increases, nutrient requirements increase, and the carrying capacity of your land decreases,” Smith said. “If we lose sight of that, then we generally find ourselves in a situation where cows are too big, the ranch is overstocked, and we either take a hit on productivity or have to start to make drastic modifications to the environment through supplementation.”

On the flip side, he said, thinking smaller cows are more efficient just because they’re smaller isn’t necessarily true. While there is certainly animal-to-animal variation in feed efficiency, the general rule of thumb is that efficiency of nutrient use for maintenance increases as body weight increases.

“What is true is that smaller cows generally eat less than larger cows, so ranch carrying capacity is often greater for smaller cows. When you’re moving from a 1,000- to 1,300- to 1,600-pound cow, you must decrease stocking rate accordingly. How much does she weigh? That would be my first question.”

Smith said that “a lot of us think we have 1,000-pound cows, but in reality, those cows often weigh 1,200-1,300 pounds. If we aren’t objectively measuring mature cow weight, we’ll almost always underestimate it. A set of scales will quickly pay you back.”

What is perceived to be mature cow weight is also heavily influenced by that cow’s condition, he said.

“If we want to get a handle on where we are as far as mature cow size, we need to level the playing field by correcting weight for body condition. Otherwise, we might inadvertently select for skinny, hard-doing cows.”

He recommends producers focus on both.

Smith also said there are consequences to smaller cows in that cow size also influences finished calf weight. For instance, a 1,000-pound cow at a body condition score of 5 will generally produce a calf that finishes at just under 1,150 pounds if a terminal cross is not used to produce calves that can be marketed to hit industry targets.

“We probably need to have 1,200- to 1,300-pound cows to finish calves that meet current industry standards for finished calf and carcass weight,” he said.

“If we try to use the same cattle to do both, and cow size isn’t somewhere in that 1,200- to 1,300-pound range, then either the calves run the risk of being discounted for small frame size, or cow size will increase over time.”

Smith also said that is why he believes that 1,200- to 1,300-pound mature cow size is probably the sweet spot for most operations that can’t or aren’t willing to distinguish between maternal and terminal breeding decisions in their herd.

Milk production is also another area for concern. Not only is milk expensive to the cow from a nutrient standpoint, but the conversion of milk to calf weight gain is poor.

“A 5-pound increase in average daily milk yield is expected to increase daily energy requirements by a little over 15%, but only increase calf growth by 0.2 pounds per day,” he said.

Because of the way cattle partition, or prioritize, the use of nutrients, reproduction is generally the first thing to go when the cow’s needs aren’t met, Smith said.

“More often than not, less milk is more economical in a resource-limited environment,” he said.

“As the saying goes, it is incredibly difficult to manage what you don’t measure,” Smith said. “It is important to keep the records that will allow you to first identify where you are, then decide where you need to go from there. We often focus singularly on outputs without also addressing how that may influence input if we aren’t careful.”

Smith reminded producers not to underestimate the value of heterosis, or hybrid vigor, saying intentional, strategic crossbreeding can drastically and positively influence lowly heritable traits such as survivability, reproduction, longevity and disease resistance.

He also encouraged producers to be mindful of birth weights, mature weights and milk when making crossbreeding decisions, saying, “Choose genetics that are similar for those traits if you don’t want to be surprised.”

As for sire selection, Smith said to utilize bulls that match production goals.

“More is not always better.”

He recommended using expected progeny differences, or EPDs, and production indices, which are currently the best and most useful tools for comparing the genetics of one animal to another. But, Smith said, don’t overlook the value of phenotype and actual data.

“If you want to select cattle that have a high probability of not working in the real world, then selecting only based on EPDs is a really good way to do that.”

Other considerations: “Has he passed a breeding soundness exam with objectively defined criteria? When was he born relative to others from the same operation?” Smith said a bull’s birthdate relative to the others within that operation’s respective calving season can be an indicator of his dam’s reproductive efficiency.

Some sire culling tips Smith passed on were to continue to monitor a mature bull’s fertility and ensure he pulls his weight when compared to other bulls on the operation.

“Has he failed a breeding soundness exam? Is his fertility lower than other bulls? Do his calves have issues? Is his temperament an issue? If any of these raise concern, then his future in the herd should be critically evaluated.”

Smith also said when culling cows and selecting replacement heifers, “we should think beyond some of our more conventional metrics of productivity. Does she reflect what you actually want to market? How old is she relative to the others? How soon does she conceive during your breeding season, or does she fit into your target calving window? And does she continue to wean a healthy calf, year-in and year-out?”

“We do a poor job of culling open cows and even poorer job of culling cows who calve but don’t raise that calf,” Smith said. “Is she working in the environment that you need her to? Does she continue to check all the boxes? If not, then find another career for her.”

The bottom line, he said, is to “keep the records that allow you to make the decisions required to achieve your goals, then continue to move the bar forward.”