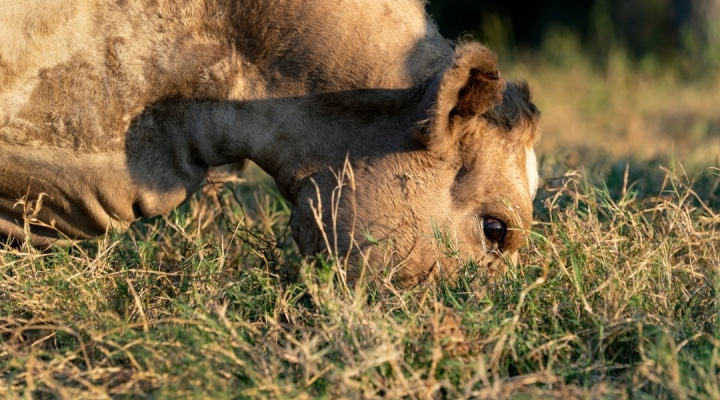 Texas beef cattle had plenty of grazing and producers put away above-average stocks of hay due to improved moisture levels around the state this summer. (Texas A&M AgriLife photo by Laura McKenzie)

COLLEGE STATION, Texas — Beef cattle prices and forage conditions have been much improved for Texas producers so far in 2021, according to Texas A&M AgriLife Extension Service experts.

Most Texas cattle producers experienced cooler, wetter summer conditions than normal, but weather has turned drier over the past few weeks as they prepare for fall and winter. Prices on most cattle classes have also been higher over the course of 2021 than in previous years.

Joe Paschal, Ph.D., AgriLife Extension livestock specialist, Corpus Christi, and Jason Smith, Ph.D., AgriLife Extension beef cattle specialist, Amarillo, both in the Department of Animal Science within the Texas A&M College of Agriculture and Life Sciences, said growing conditions were very similar in their respective regions, but that producers should be planning for a drier winter after weather took a turn for the better this summer.

Paschal said negatives associated with heavy rains in the Upper Coastal region included flooding in low areas and muddy conditions for ranchers and their herds. There were also higher numbers of flies and mosquitoes and likely an increase in internal and external parasites due to above-normal moisture levels.

There were also some fatal cases of pneumonia in calves and younger cattle due to high humidity and continual rains, he said.

Forage quantities increased but quality decreased due to weeds, he said. Pastures may have recovered some for ranchers who avoided overgrazing but not enough for fall due to the lack of moisture over the last several weeks.

“It was a bumper crop of hay for two cuttings, but most of it is probably low quality and should be tested so that ranchers can plan a good supplementation program,” Paschal said. “Most cows recovered body condition, but some have not, and good feed programs are important for the next crop of calves.”

Conditions were drier in South and Southwest Texas areas, but most pastures and rangelands were understocked due to drought, so grasses recovered quicker, he said. Those areas did not produce as much hay, but cuttings were generally very good quality and quantity.

There were fewer cattle in poor body condition in those areas, Paschal said.

“The rains are long gone, and the grass is dry to crispy dry,” he said. “Nights are cooler, so I doubt there will be any additional summer grass growth even if it did rain, but we could use the moisture to replenish tank water for livestock and wildlife and for any winter pasture that is planted.”

To the north, overall cattle and grazing conditions were relatively good, Smith said.

Forage grasses were slow growing for the most part as conditions turned drier, but grazing is good. The question is for how long.

Much of the Panhandle and Texas Plains received some much-needed rainfall this summer and experienced tolerable temperatures, he said. The weather is cooling down, but like most of the state, conditions have once again turned dry.

Smith said despite pasture and rangeland conditions being better than last September, stocking rates should reflect their available forage and hay stores with the expectation for drier conditions. Rain is in the forecast, which could help winter wheat pastures establish, but producers should avoid overgrazing.

Drought in the past has conditioned most experienced ranchers to plan for short moisture, but Smith said that there is always a temptation to add cattle when forages are plentiful. Making value-based supplemental feeding decisions is important this year due to high feed costs.

“I always encourage producers to be mindful and plan for the worst,” he said. “It’s easier to react to an overabundance of forages than it is to respond to a shortage. It has not been cheap to feed cattle anything over the past year, so producers need to be mindful of their input costs and adjust according to their situation.”

Available surface water is hit and miss around the Panhandle and Texas Plains, Smith said. Most creeks are dry, and some playa lakes that typically hold water are as well, while others have been replenished by scattered rainfall.

Justin Benavidez, Ph.D., AgriLife Extension economist, Amarillo, said price outlooks were favorable for producers. Prices on most classifications were higher and were expected to stay relatively strong at this point in the cattle cycle.

The overall U.S. herd is shrinking due to severe drought in western and northwestern states, but not as significantly as in 2011, when Texas producers were forced to thin herds and liquidate, he said. But the overall herd reduction will ripple into the market for at least the next two calving cycles.

“Every cull cow removed from the herd is not going to produce a calf during the upcoming year,” he said. “So, we have lost a year’s worth of new slaughter and breeding cattle due to liquidation in states dealing with severe drought. That will likely affect prices into next year and possibly beyond.”