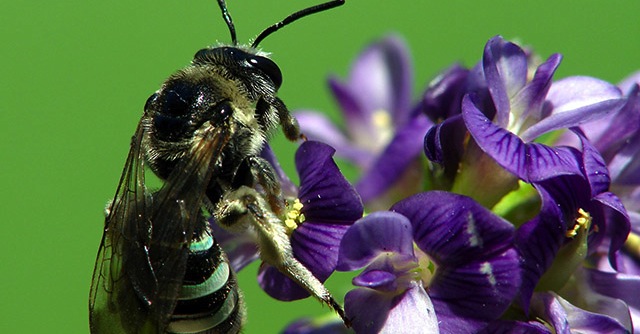 WASHINGTON — U.S. Department of Agriculture (USDA) scientists are digging into the soil around alfalfa fields near Touchet, Washington, to unearth new clues to improve the lives of the crop’s chief insect pollinator: the alkali bee.

Alkali bees are champion alfalfa flower pollinators—even outperforming the respected honey bee. So much so, some Touchet farmers maintain open soil parcels called “bee beds” to encourage female alkali bees to dig their nests and raise their young, ensuring generations of pollinators for seasons to come. In turn, that leads to increased yields of alfalfa seed, which is sold to grow premium hay for dairy cows and other livestock.

Alkali bees from one acre of nesting bed pollinate 100 or more acres of alfalfa resulting in a harvest of about 100,000 pounds of seed, notes Jim Cane, an entomologist with USDA’s Agricultural Research Service (ARS) in Logan, Utah.

Last June, Cane travelled from Logan to Touchet to research the female bee’s nesting needs, especially preferred soil-moisture levels. Towards that end, he teamed with soil hydrology specialists from Pullman, Washington. Together, they measured water vapor flow from the surrounding soils leading into the bee’s underground tunnels and brood chambers. Each chamber houses one larva as well as a pollen ball and nectar for nourishment.

Cane hopes to acquire more data about the bee’s soil-moisture needs so that alfalfa growers can better manage bee beds. Larvae, for example, need enough moisture to keep their chambers from drying, but not so much that molds grow and ruin the pollen provisions, adds Cane, who is with ARS’s Pollinating Insect-Biology, Management and Systematics Research in Logan.

Another trip to the site is planned for this June to learn more about the performance and role microbes play in the bees’ pollen provisions.

Learn more about this research in the April 2017 issue of AgResearch magazine.

Plant genes may have 'volume control'