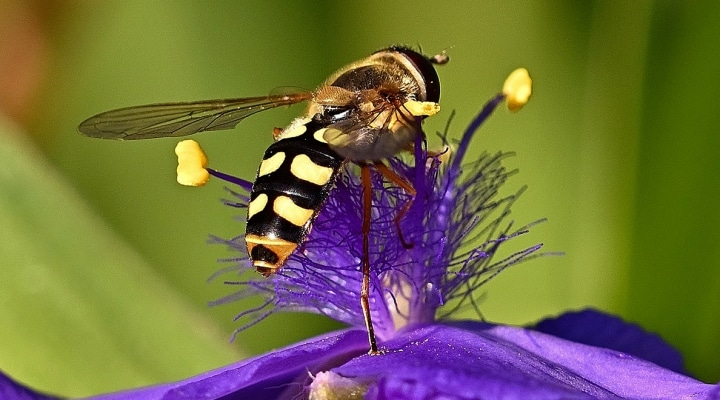 A syrphid fly, also known as a hover fly, mimics bee colors and can act as a pollinator. (Courtesy Photo)

PULLMAN, Wash. – A tiny bee imposter, the syrphid fly, may be a big help to some gardens and farms, new research from Washington State University shows.

An observational study in Western Washington found that out of more than 2,400 pollinator visits to flowers at urban and rural farms about 35% of were made by flies—most of which were the black-and-yellow-striped syrphid flies, also called hover flies. For a few plants, including peas, kale and lilies, flies were the only pollinators observed. Overall, bees were still the most common, accounting for about 61% of floral visits, but the rest were made by other insects and spiders.

“We found that there really were a dramatic number of pollinators visiting flowers that were not bees,” said Rae Olsson, a WSU post-doctoral fellow and lead author of the study published in Food Webs. “The majority of the non-bee pollinators were flies, and most of those were syrphid flies which is a group that commonly mimics bees.”

Syrphid flies’ bee-like colors probably help them avoid predators who are afraid of getting stung, but they are true flies with two wings as opposed to bees which have four. The flies might have additional benefits for plants, Olsson added, since as juveniles they eat pests like aphids. As adults, they consume nectar and visit flowers so have the potential to move pollen the same way that bees do, though it is less intentional than bees who collect pollen to feed their young.

For the study, the researchers surveyed plants and pollinating insects and spiders on 19 rural farms and 17 urban farms and gardens along the Interstate 5 corridor in Western Washington. They conducted surveys six separate times over two years. In addition to the visits by bees and syrphid flies, they also catalogued more rare visits by other arthropods including wasps, lacewings, spiders, butterflies, dragonflies, beetles and ants—all with visits of less than 4%.

Olsson first noticed the many different non-bee pollinators while working on a bee-survey project led by Elias Bloom, a recent WSU doctoral graduate. The results of this study underscore the need for researchers as well as gardeners and farmers to pay more attention to alternative pollinators, Olsson said, and hoped that similar studies would be conducted in other regions of the country.

“Bee populations are declining, and we are trying to help them, but there’s room at the table for all the pollinators,” Olsson said. “There are a lot of conservation and monitoring efforts for bees, but that doesn’t extend to some of the other pollinators. I think people will be surprised to find that there are a lot more different types of pollinating insects – all we really need to do is to start paying a little more attention to them.”

The study also noted pollinator differences between rural and urban spaces. Observations sites in urban areas showed a greater diversity of pollinators corresponding with the wider range of plants grown in city gardens and smaller-sized farms. Rural farms with their larger fields of plants had a greater abundance.

For every grower, urban or rural, who is interested in increasing the number and diversity of pollinators visiting their fields or gardens, Olsson recommended increasing the variety of flowering plants.

Making sure that something is flowering all throughout the season, even if on the edge of a field, will support the biodiversity of pollinators because their different life stages happen at different times of the year.

“Some pollinators like certain butterflies and moths are only present in a pollinating form for a small period of time,” Olsson said.  “They may only live for a few days as adults, so when they emerge and are ready to pollinate, it’s good to make sure that you have something for them to eat.”