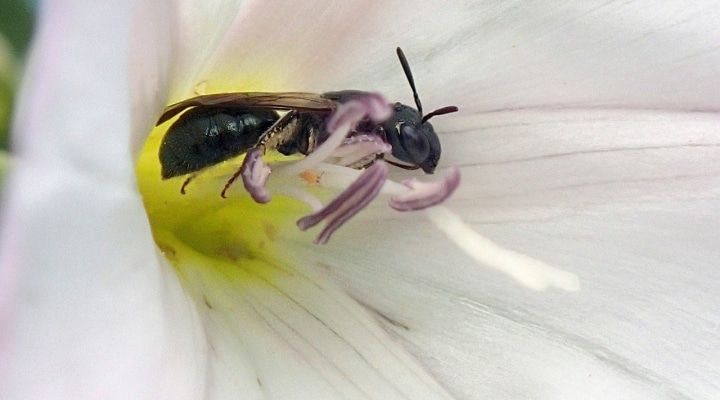 Rutgers scientists assessing the level of diversity among bee species necessary for sustaining populations of wild plants have concluded that ecosystems rely on many bee species to flourish, not just a few dominant ones. (photo by Rutgers University)

NEW BRUNSWICK, N.J. — Rutgers scientists assessing the level of diversity among bee species necessary for sustaining populations of wild plants have concluded that ecosystems rely on many bee species to flourish, not just a few dominant ones.

The report, published in The Proceedings of the Royal Society B, supports the fundamental idea that biodiversity is key to sustaining life on Earth, notably in an era when species are rapidly going extinct due to pressures from climate change and human development.

“This is one of the strongest demonstrations to date of the importance of bee diversity, and of rare bee species, for maintaining healthy ecosystems,” said Dylan Simpson, the author and a doctoral candidate in Rutgers’ Graduate Program in Ecology and Evolution. “This matters because pollination is critical for plant reproduction. And life on land depends ultimately on plants.”

The researchers conducted their investigation by analyzing data from extensive field surveys recording bees visiting flowers in 10 wild settings and one experimental garden of native plant species in New Jersey. In the surveys, the researchers directly observed bee-plant interactions, identified bee species and the visited flower’s species, and tracked the frequency of interaction between specific species of bees and plants.

There are about 400 species of bees in New Jersey alone – some familiar, like the Common eastern bumble bee (Bombus impatiens), but others rarely seen. “There are many more bees than you realize,” Simpson said. “A lot are small, some are metallic and shiny, some are dark, not striped, and inconspicuous.”

While observations were all made in open, meadow habitats, observed bee species included those associated with both forests and human-dominated habitats. The pollinated plants included some of the following: black-eyed Susan (Rudbeckia hirta); bee balm (Monarda fistulosa); different species of goldenrod (in the genus Solidago); New England aster (Symphyotrichum novae-angliae); species of milkweeds (in the genus Asclepias); and common weeds, like white clover (Trifolium repens) and red clover (T. pratense).

The researchers were trying to establish how many bee species are needed to pollinate distinct segments of the wild. Using that as an investigative framework, they also wanted to understand the function of rare species in that landscape.

“There is a moral and ethical imperative to try to steward ecosystems to maintain communities as they are, so they don’t go extinct,” Simpson said. “But there’s also the practical argument to be made about reaching a better understanding – a lot of our food comes from animal-pollinated crops.”

Based on their data analysis, the authors found:

Much of previous research has typically focused on single-species crops and concluded that pollination often depends on a few common bees.

“In contrast, this study focused on a much wider variety of plants and found that even rare bees can be important to particular plants,” Simpson said. “These results suggest that ecologists have likely underestimated the importance of bee diversity for pollination in diverse, natural ecosystems.”

Other authors on the paper include: Rachael Winfree, a professor in Rutgers’ Department of Ecology, Evolution and Natural Resources; Lucia Weinman, Michael Roswell, and Molly McLeod, all of Rutgers’ Graduate Program in Ecology and Evolution; and Mark Genung of the University of Louisiana at Lafayette.