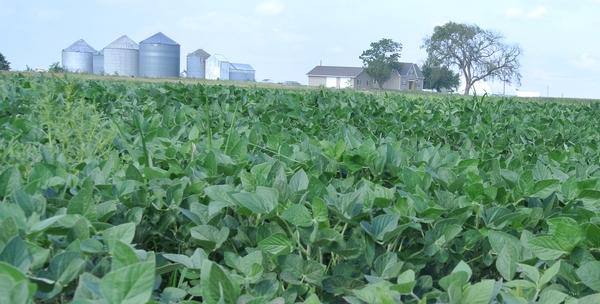 The highly anticipated August Crop Production report presented a record yield for soybeans this year. Despite the forecast of higher production, soybean futures went into the weekend up over 30 cents for the week. Strong Chinese demand and skepticism surrounding production levels supported this rally, according to University of Illinois agricultural economist Todd Hubbs. (Sue Nichols, Michigan State University)

URBANA, Ill. — The highly anticipated August Crop Production report presented a record yield for soybeans this year. Despite the forecast of higher production, soybean futures went into the weekend up over 30 cents for the week. Strong Chinese demand and skepticism surrounding production levels supported this rally, according to University of Illinois agricultural economist Todd Hubbs.

“Impacts with coronavirus issues may influence timely reporting. FSA acreage at such low levels does leave the question of how large final soybean acreage may be in 2020. The next FSA report due out Sept. 11 looks to provide more clarity,” he adds.

The U.S. average soybean yield forecast of 53.3 bushels showed a 3.5-bushel increase from the July forecast. Yields in many states across the Corn Belt reflected the excellent growing conditions shown in crop condition reports. Nine of the 18 states tracked for weekly Crop Progress reports on soybeans are set for record yields this year.

“The derecho that ripped through Iowa and northern Illinois last week led to much speculation about crop loss. A probability of some losses seems very likely. The magnitude of impact on national yields is difficult to predict,” Hubbs states. “Iowa (58 bushels per acre) and Illinois (64 bushels per acre) yield forecasts may fall with impacts in Iowa being more severe. This week’s crop condition report looks to provide an initial indication of the impact.”

“Drier weather projections over large swathes of the Corn Belt fuel the idea of lower yields. The last time USDA’s August forecast came in over two bushels higher than the final yield occurred in 2003. An assumption of a crop near 4.42 billion bushels seems prudent now, but a smaller crop enters the picture if the weather forecast comes to fruition,” Hubbs states.

The projection for soybean consumption during the 2020-21 marketing year sits at 4.445 billion bushels. Soybean use increases by 583 million bushels from last year on higher crush and export totals.

“This dramatic upturn in use links directly to an escalation in exports to China,” Hubbs notes. “Recent sales provided support for optimism surrounding higher exports. At approximately 442 million bushels, outstanding sales for the next marketing year are off to a tremendous start.”

“If China bought from the U.S. at a similar percentage to 2017-18, U.S. exports to China come in at 1.09 billion bushels. The rest of the world needs to take 1.035 billion bushels to hit the USDA export projection. Exports at these levels remain feasible. The potential for soybean exports expanding dramatically above the present forecast looks limited,” Hubbs explains.

“The prospect of the U.S. recouping market share from China seems high given recent sales and the commitments associated with the trade agreement. A large crop out of South America with reduced exports to China sets up buying opportunities by non-Chinese importers of those soybeans,” Hubbs states.

The forecast for the marketing year average price dropped to $8.35 per bushel in the latest WASDE report.

“At this point, expectations of a much smaller soybean crop seem premature,” Hubbs concludes. “Optimism about exports is well-founded. The recent price rally looks like a pricing opportunity for new crop soybeans under a scenario in which production stays near USDA forecast levels.”