Home » Be voice for Pennsylvania pups 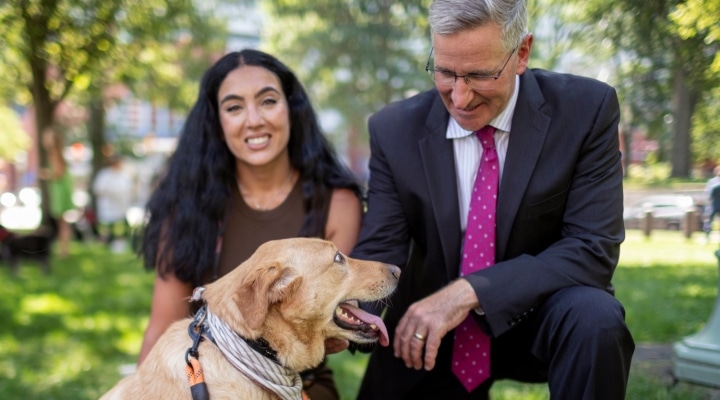 Joined by Second Lady Gisele Fetterman and Levi Fetterman, the Fetterman family dog, Agriculture Secretary Russell Redding and dog law advocates Senator Judy Schwank and Representative Eddie Day Pashinski rallied at the Capitol today calling on Pennsylvanian’s to ask their legislator to save the Bureau of Dog Law Enforcement and their invaluable work by supporting Senate Bill 232 and House Bill 526. (photo by Pennsylvania Department of Agriculture)

The Bureau of Dog Law Enforcement works to crack down on illegal puppy mills and kennels, ensure the health and welfare of dogs living in breeding kennels and throughout Pennsylvania, inspect licensed kennels to ensure proper standards, monitor and track dangerous dogs, investigate dog bites and provide justice to victims, investigate attacks on livestock and provide indemnification to farmers, and reunite lost dogs with families or help them find shelter until they find a new forever home. This work is at significant risk as they’ve been unable to fill critical warden vacancies across the commonwealth and are barely able to keep up with minimum mandated requirements due to a funding crisis created by inaction to raise the dog license fee – which has been the same for more than 25 years – that funds their work.

“We’re here today to ask anyone in Pennsylvania who loves dogs and wants neighborhoods across the commonwealth to remain safe to contact your legislator and ask them to save the Bureau of Dog Law Enforcement,” said Redding. “We’ve been warning this day would come – when the bureau runs out of money and services are at risk – for years. Dog licenses cost less than the cost of a chew toy. Our neighboring states charge up to $20 and the national average for an annual license is $10.

“Joining us today are dog lovers and advocates from around the state who have said they want to increase the fee – they want dogs to be loved and healthy and happy, they want lost dogs to have a chance to come home, they want protection for the dogs who spend their life in a kennel, and they want dog bite victims to have someone advocating for them and dangerous dogs to not roam the streets. If you want this too, call your legislator,” added Redding.

All dogs three months and older are required to be licensed, the cost of an annual license has been $6.50 since 1996. And since 1893, the enforcement of the dog law has been funded through the sale of dog licenses. Services related to dogs have never been paid for by taxpayers until now. To keep minimum mandated services up and running, taxpayer dollars are now being directed to the Bureau of Dog Law Enforcement to the tune of more than $1 million annually. For the 2020-21 budget year the bureau accepted a supplemental transfer of taxpayer dollars in the amount of $1.2 million. Another $1.5 million is proposed for 2021-22.

For several years, the department has been pushing for a minimal dog license fee increase to keep the Bureau of Dog Law Enforcement funded to continue their work.

“It breaks my heart to think of the abused and neglected dogs that could be overlooked without proper enforcement,” said Second Lady Gisele Fetterman. “Our pup, Levi, was chained outside for the first two years of his life. He was rescued because the resources were there to save him.”

“So many people across the Commonwealth view their dogs as family. Right now, we aren’t doing enough at the state level to ensure their safety,” said Schwank. “A modest dog licensing increase would allow the underfunded Dog Law Enforcement Bureau to provide the kind of oversite we need to make sure our canine friends are safe and healthy.”

A minimal fee increase – for example for a spayed/neutered dog would increase from $6.50 to $10 annually – will benefit Pennsylvanians at large. The bills will also require puppies to be licensed at 8 weeks or the same age they are legally allowed to be sold. This efficiency is expected to increase license sales for puppies by providing education at the point of sale and will further stabilize the bureau.

“A reasonable dog license fee increase is the most logical solution to solving the issues facing the Bureau of Dog Law Enforcement by restoring funding without needing to use taxpayer dollars,” Pashinski said. “House Bill 526 and Senate Bill 232 would do just that, saving taxpayers millions of dollars, restoring the resources necessary for our dog wardens to safeguard dogs in commercial breeding kennels, protect the public from dangerous dogs, help reunite stray dogs with their families, and much more. You can do all of this by simply raising that fee by about a penny a day.”

What’s at stake and how to help:

Pennsylvanians are encouraged to be the voice for PA pups and become part of the solution by contacting their legislators and asking them to support SB 232 and HB 526.