Subscribe
Home / Missouri / Be patient on roadways after floods 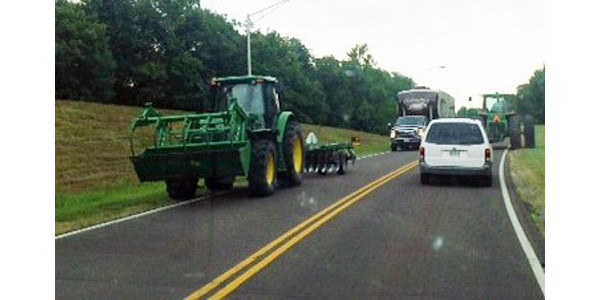 COLUMBIA, Mo. — Motorists should exercise patience and caution as they travel rural roadways this summer, urges Jim Humphrey, a University of Missouri Extension livestock specialist based in Andrew County.

In areas hit by historic flooding this spring, travel remains treacherous and cumbersome as farmers try to plant their crops and motorists look for alternate routes.

Standing water has damaged many rural roadways. Farmers moving equipment from field to field may encounter crumbling road shoulders as they pull over to let other vehicles pass. Even before spring flooding began, many roads had already suffered damage from heavy snows and ice in the winter of 2018.

In addition, road closures have diverted traffic to rural roads. The influx of drivers unfamiliar with two-lane roads compounded traffic problems as farmers rushed to get a crop in between rains. Trucks hauling gravel and sand for road, railroad and levee repairs also increased traffic. Humphrey noted that quarries in his area were running trucks on weekends to haul supplies for repairs. Frequent rains delayed mowing of grass along roadways and intersections, resulting in limited visibility due to overgrown grass.

Northwestern Missouri has seen several serious accidents recently that Humphrey says were indirectly related to spring flooding. The Missouri State Highway Patrol reported that a 17-year-old Stanberry youth driving a tractor was killed in a June 5 accident on state Highway O. According to the patrol, the youth moved into the center of the road to avoid a culvert just as a dump truck was attempting to pass. The truck hit the tractor, sending it rolling into a ditch.

A farmer was hospitalized after a dump truck crested a hill and struck a tractor near Savannah on May 28. In April, four people were injured near Stewartsville when an SUV rear-ended a tractor.

This problem is not going away anytime soon, Humphrey says. “We have a lot of things that are not normal this year.”

MU Extension health and safety specialist Karen Funkenbusch notes that the U.S. Centers for Disease Control and Prevention lists transportation incidents as the leading cause of farm-related fatalities.