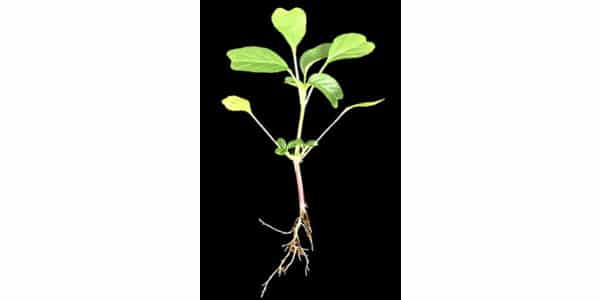 EAST LANSING, Mich. — Purple amaranth (Amaranthus blitum L.), also known as livid amaranth, was identified for the first time in March 2019 in an ornamental greenhouse specimen planted in soilless media sent into Michigan State University Plant & Pest Diagnostics for other analysis. In August 2019, it was again identified in samples from a couple of vegetable growing systems in the southwest portion of Michigan. Since that time, it was seen in two other greenhouse locations again in soilless media.

There are no previous records of this species in the herbaria for the state of Michigan; however, it has been found in several other states, particularly along the East Coast and in the South, according to the USDA Plants Database. Though it is unclear how this species came to Michigan, it appears based on the level of the infestations in the vegetable fields and multiple greenhouse sightings, that it has been here for a couple of years or maybe more.

While no new weed species are welcome, the most concerning thing about this species is that one of the field-collected populations has been tested and found to be resistant to Groups 5 and 7 herbicides, i.e., photosystem II (PSII) inhibitors, such as prometryn and linuron, thus limiting options for commercial growers. Tests are ongoing to determine the level of resistance to these two sites of action.

There are several features of purple amaranth that set it apart from our top native pigweeds (Powell amaranth, redroot pigweed and smooth pigweed) and even from our glyphosate-resistant pigweed invaders (Palmer amaranth and common waterhemp). The leaf tips of purple amaranth are all deeply notched (Figs. 1 and 2). This species is also highly branched unlike the other pigweeds mentioned, which typically have one central stem (Fig. 3).

Though it appears to be highly prolific (i.e., produces a lot of seed) like the other pigweed species, these purple amaranth seeds are more freely released from the plants and stay within the capsule (papery covering) (Figs. 4 and 5), according to Costea et al. 2003. Seeds are produced on every plant (monoecious, unlike Palmer amaranth and common waterhemp) at the ends of branches and in leaf axils with an appearance thinner than that of the native pigweeds (Fig. 6).

Sushila Chaudhari, MSU Department of Horticulture’s new edible specialty crops weed scientist, will be investigating the distribution of this weed species in Michigan as well as the biology and control options available. If you have seen purple amaranth in your field or greenhouse, please feel free to contact Chaudhari (sushilac@msu.edu), Ben Werling (werlingb@msu.edu) or Erin Hill (hiller12@msu.edu) with more information.

Using the sorghum family as cover crop and forage