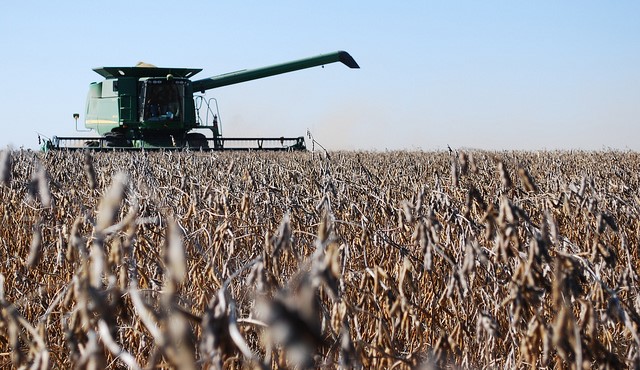 In 2017, Monsanto sold 25 million acres worth of dicamba resistant soybeans. In 2018, that number was expected to double to 50 million. (United Soybean Board, Flickr/Creative Commons)

WASHINGTON — It’s been nearly three weeks since the merger between Bayer AG and Monsanto officially began its integration, about two months since the deal closed and nearly two years since the planned deal was announced.Despite that, newly appointed Bayer officials are vague on how they plan to handle the mountain of lawsuits inherited from Monsanto over pesticides such as glyphosate and dicamba.

These lawsuits have plagued Monsanto, most recently in an August 10 court decision that ordered the company to pay $289 million in damages.

Begemann highlighted that the companies had only been together for a short time because of the mandate by the U.S. Department of Justice that disallowed the two companies from making any plans until August 16.

“We continue to learn, just like any company, from feedback from our customers.” He said. “We’ll continue to listen to that feedback, engage in that conversation, look at additional research, and move on from there.”

Of the recent verdict over glyphosate, Begemann said it doesn’t change the way the company plans to move forward.

“I would look at that as one case — doesn’t change 800 scientific studies, it doesn’t change 40 years of use, it doesn’t change the incredible value that products brought to agriculture and consumers worldwide. We’re thoroughly supportive of the product and will continue through the legal process that’s available to us,” said Begemann. “It’s a horrible and unfortunate situation with the plaintiff, Mr. Johnson. We have great sympathy for him and his family, but Roundup does not cause cancer.”

After the August 10 decision against Monsanto, Bayer’s stock prices dipped 10 percent. That doesn’t bode well for future litigation against the newly merged company.

While Roundup, the commercial name for the chemical glyphosate, is the subject of more than 8,000 lawsuits against Monsanto, dicamba has only been in use for soybeans for three years. But in that time, it’s attracted 37 lawsuits over damage to crops.

Dicamba has been hailed as Monsanto’s solution to weeds that have become resistant to glyphosate in recent years, wreaking havoc on soybean fields across the Midwest. But as effective as it was on weeds, dicamba also has the ability to damage soybeans, cotton, and specialty crops that are not genetically modified to withstand the chemical.

By July of last year, university weed scientists estimated more than 2.5 million acres of soybeans had been damaged by dicamba, according to Dr. Kevin Bradley, professor of plant sciences at University of Missouri. By the end of 2017, that estimate would jump to 3.6 million acres. One dispute over damage in Northern Arkansas led to a man’s murder.

As a result, the Environmental Protection Agency placed greater restrictions on the chemical in early 2018, and eight states added further safety measures and training requirements. Monsanto cautioned against the application of reactionary restrictions.

“We sympathize with any farmers experiencing crop injury, but the decision to ban dicamba in Arkansas was premature since the causes of any crop injury have not been fully investigated. While we do not sell dicamba products in Arkansas, we are concerned this abrupt decision in the middle of a growing season will negatively impact many farmers in Arkansas,” Monsanto said in a 2017 statement.

The company argues that any damage was due to a failure by operators to follow the extensive label, which outlines proper use of the chemical, and not the fault of the company.

But a lawsuit filed by the National Family Farm Coalition in the U.S. Court of Appeals for the 9th Circuit claims the EPA’s two-year approval of dicamba in 2016 was unlawful, stating Monsanto influenced the registration process and the EPA didn’t follow the Federal Insecticide, Fungicide and Rodenticide Act and the Endangered Species Act.

As of July 15, 2018, the number of investigations into dicamba-related damage has dropped to 605, compared to the 1,411 reported by the same time in 2017. Weed scientists estimate 1.1 million acres of soybeans have been injured. But this doesn’t include numbers from key soybean producing states like Iowa and Wisconsin.

These numbers show a marked improvement from the damage in 2017, which can be attributed to stronger restrictions from the EPA and states, better training from the chemical manufacturers, or the increased sale of dicamba-resistant crops.

In 2017, Monsanto sold 25 million acres worth of dicamba resistant soybeans. In 2018, that number was expected to double to 50 million. That’s more than half the 89.5 million acres of soybeans planted this year.

–By CHRISTOPHER WALLJASPER of Midwest Center for Investigative Reporting

What are riparian buffer strips?