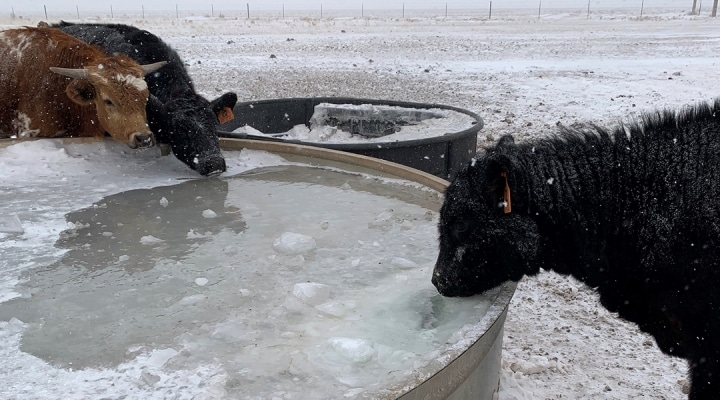 Tending to cattle water and feed needs is a priority during the winter storm. (Texas A&M AgriLife photo by Tiffany Lashmet)

COLLEGE STATION, Texas — Temperatures across the state should start rising soon, but damage from the recent winter storm will linger in the form of broken pipes, flooded homes and fields, lost production and animal life, and continuing emotional and financial issues.

Across Texas, homeowners have had to suffer extreme temperatures not seen for over 30 years. Some residents lost electricity and water for days while others experienced rolling blackouts. Many people were not prepared and will see significant damage from the freezing temperatures.

The Texas A&M AgriLife Extension Service is working in conjunction with many other state agencies to help Texans — from agriculture producers to homeowners to landowners — cope with the disaster.

While only time and warmth will heal some of the issues, AgriLife Extension has identified a number of publications to address some of the emotional and financial issues from a disaster such as the past week of weather.

These publications, as well as other publications to prepare for and recover from disasters and emergencies, can be found at the Texas Emergency and Disaster Extension Network, or Texas EDEN.

Even once the temperatures rise above freezing and electricity is restored, there will be much to do to deal with potential food loss, thawing frozen pipes, clearing debris or downed tree limbs, and continued care for pets and livestock. The publications help address those and many other issues.

Experts warn that managing stress is an important part of coping and moving forward after any disaster. Dealing with a disaster — whether spending long hours trying to feed and water livestock and protect young animals being born during a blizzard or battling to keep warm and feed a family — can take a toll, sometimes unseen.

Stress in Adults after a Disaster: Warning Signs and Management offers individuals examples of signs that may indicate they or their loved ones are experiencing longer-term effects and some management techniques to deal with the disaster-related stressors.

Also, as temperatures begin to rise, it is instinctive to get outside and start assessing damage and maybe even head back to work. However, many precautions still need to be taken.

Don’t Get Caught Out in the Cold! is a document that helps outline winter weather awareness and safety tips. Hypothermia not only happens when temperatures reach the freezing mark. It can also occur at temperatures of 50 degrees or even higher in wet and windy weather.

Additionally, even if it seems safe to get back on the roads, the document offers some tips to prepare for the “just in case” situations that could occur as you do so.

Agriculture battles against the elements

Monty Dozier, Ph.D., AgriLife Extension program director for disaster assessment and recovery, said he anticipates the county emergency boards getting together across the state early next week to begin assessing the losses. The reports will be sent to the state level to apply for federal resource relief.

“We’ve not had a formal request for animal feeding or assistance as of yet, and so far we’re not hearing of loss of livestock, although we could see some issues within the poultry industry,” Dozier said. “We are hearing there are a lot of problems getting out and gaining access to determine the health of livestock and to get feed resources across the state.”

He said the rolling blackouts are disrupting the supply of water to livestock as well as industry, and this is causing a problem with milk processing plants, which could lead to dairies having to dump product.

Texas Ag Commissioner Sid Miller said dairies could be dumping at least $8 million a day in products because they can’t get enough natural gas or electricity.

Dozier said so far all requests for access to hay have been handled by local jurisdictions, so no feeding supply stations have been activated. However, the feed supply chain is rapidly becoming the biggest issue as icy roadways are hampering the transportation of the feed.

“Our feed supply chain is being impacted — getting feed into feedstores. Producers are concerned about the transportation of the feed products,” he said.

As for crop production, Dozier said the citrus industry is expected to suffer a major impact from the hard freezes. They are trying to determine the damage now. Also, he said, there could be some early row crop injury as well.

“The damage is going to be down in the Valley and any injury to the wheat crop will be the biggest sectors affected,” Dozier said. “Then we will also have to look at damage to the agricultural infrastructure – what pipes busted, what equipment needs to be repaired, etc.”

Dozier said it will take some time before all of the damages can be assessed, and Miller said that the losses for the agricultural community could be in the “millions, if not billions.”

AgriLife Extension has also created the #AgriLifeStrong, a hashtag on Facebook where people across the state are sharing their struggles as well as their photos and measures they are taking to cope and survive.

Following up on the February freeze damage
April 19, 2021