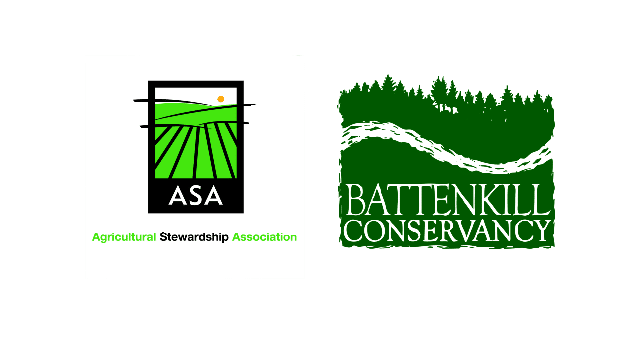 ASA was able to secure the easement and recently transferred it to BkC, effectively conserving the land through a partnership with BkC.

GREENWICH, N.Y. — A 50-acre parcel containing 3,400 feet of frontage on the Battenkill in Jackson, NY has been protected through a partnership with the Agricultural Stewardship Association (ASA), the Battenkill Conservancy(BkC) and the landowners, Kathy and Hugh Roome.

Except for a few mighty sycamores that have surrendered themselves to the river, the view of the Battenkill River from the Roome’s property has changed very little since they first purchased the land over 20 years ago. Home to an assortment of ducks, kingfishers and untold numbers of trout tucked into deep pools, “the land is located on a wonderful stretch of river that doesn’t have a structure on either side,” says Kathy. Which is one reason protecting it was so important.

The Roomes worked with ASA to donate an easement on the property. “Realizing early on that the property was a better fit for BkC, we reached out with a proposition: if ASA was able to put an easement on the property, would the BkC be open to having it transferred to their portfolio for monitoring and stewardship?” explained ASA executive director Teri Ptacek. “Of course we agreed,” recalls Lorraine Merghart Ballard, Executive Director of the BkC. “And the timing couldn’t have been better as we had been actively honing our process for easement acquisition. And here was a chance to work alongside ASA and watch to learn from their efforts and protect a valuable stretch of land and water.” ASA was able to secure the easement and recently transferred it to BkC, effectively conserving the land through a partnership with BkC.

ASA has helped more than 135 families conserve 23,500 acres of working farms and woodlands in Washington and Rensselaer counties. ASA’s mission is to protect our community’s working farms and forests, connect people to the land, and promote a vibrant future for agriculture and forestry in the region. For more information about ASA’s work, visit www.agstewardship.org.

Battenkill Conservancy is a private, not-for-profit 501 c(3) organization incorporated in 1993 under the laws of the State of New York by a group of Washington County residents whose reach includes over 1,000 local, regional, national and international members and friends.