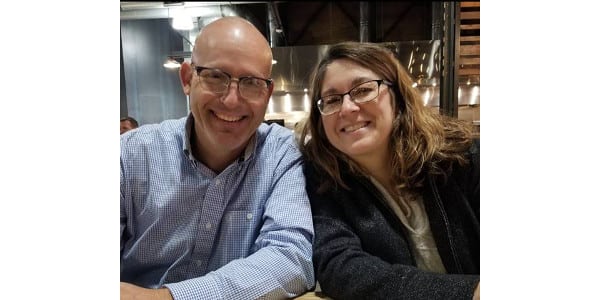 Bart & Amy Samuelson of La Porte City will be inducted into the 2020 Iowa 4-H Hall of Fame during a virtual ceremony on Sunday, August 23.

WATERLOO, Iowa — Bart & Amy Samuelson of La Porte City will be inducted into the 2020 Iowa 4-H Hall of Fame during a virtual ceremony on Sunday, August 23. Eighty-six Iowa counties are participating this year and have selected 117 inductees for their outstanding service and dedication to 4-H.

Two ceremonies will be streamed online to recognize this year’s honorees. Bart & Amy will be recognized during the 1:30 p.m. event. Visit www.iowa4hfoundation.org on the day of the ceremony to locate the online event.

When the first of the couple’s three children, Katey, came of 4-H age, the now-practicing veterinarian points out “My parents committed their efforts to the 4-H program, enrolling me, then my siblings, Emily (now Damro) and Wyatt.”

From then on, the Samuelson’s dedication to the organization mushroomed. After Bart and Amy formed and launched a 4-H club known as the Big Cedar Springers their children, who all joined the club simultaneously, found themselves expanding their own projects and interests to follow their parent’s lead. Later, Bart joined the Black Hawk County Fair Board, where he served terms as president during some challenging times. Thanks in part to his leadership, program planning, and fundraising, the Black Hawk County 4-H & FFA Fair has not only survived but thrived.

His occupation as Firefighter in Waterloo has also benefited from Bart’s commitment. He was, in 2014 named “Firefighter of the Year”.

Amy, in addition to her wife, mother, and 4-H leadership role and service on the Black Hawk Fair Board has worked for sixteen years as a teaching associate in La Porte City. Currently, the enthusiastic pair are chairs of the Family Picnic held during the Fair in July. Also added to their resumes can be Bart’s work as secretary-treasurer of the Waterloo Firefighters board, Honor Guard, and Haz-Mat team. Additionally, both he and Amy are active in their church, Immaculate Conception in Gilbertville.

Black Hawk County is pleased to honor Bart and Amy Samuelson as inductees into the 2020 Iowa 4-H Hall of Fame.

Linda Beitelspacher to be honored
August 18, 2020

Craig and Flossie Morrison to be honored
August 6, 2020