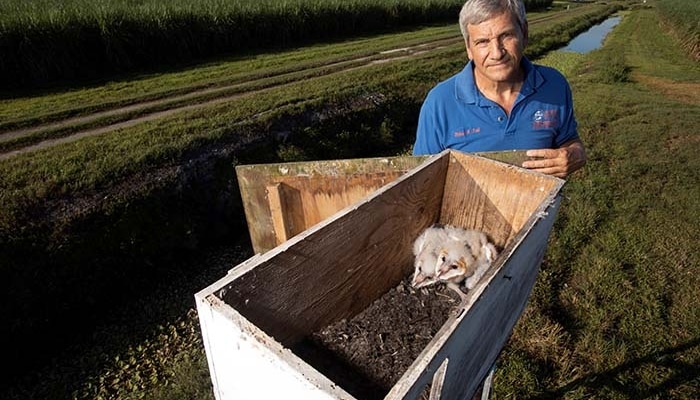 The barn owl population is soaring to new heights in the Everglades Agriculture Area (EAA) – and some see it as a conservation and agriculture milestone in the Sunshine State. (UF/IFAS photography)

BELLE GLADE, Fla. – The barn owl population is soaring to new heights in the Everglades Agriculture Area (EAA) – and some see it as a conservation and agriculture milestone in the Sunshine State.

Through the University of Florida Barn Owl Project in the EAA, a beneficial relationship has quietly thrived for the last 20 years between growers and barn owls. Growers, seeking natural rodent and pest control as opposed to chemical options, encourage barn owls to breed and hunt on their farms by providing them homes, artificial nesting boxes. These natural predators reduce the need for chemical rodenticides, which can also endanger other wildlife as they may ingest the poison. Meanwhile, a barn owl population that was once dwindling within the  EAA now sports some of the highest barn owl densities in North America. With its open agricultural terrain, the Glades is ideally suited to these winged predators.

“This project is unique in that it demonstrates that agriculture and wildlife cannot only co-exist, but that they can benefit one another,” said Richard Raid, professor of plant pathology at UF’s Everglades Research and Education Center and curator of the project. “Barn owls benefit by getting furnished homes and protection. They’re also encouraged to breed, increasing their chances for species survival. Meanwhile, growers benefit through less crop damage and saving money on rodenticides.”

Rodents are responsible for millions of dollars in damage to crops and farm equipment each year.

As such, rodent activity impacts the ability of farmers to meet market demand for agricultural products. This can set off a chain reaction that hurts both suppliers and consumers, due to the key role of agriculture within the global economy.

Meanwhile, rodent population research is very difficult, primarily because of the behavior and intelligence of these small mammalian pests, such as rats, said Raid.  Having a keen sense of smell and being very smart, rats and mice can circumvent traps and other mechanisms meant to analyze populations.

Barn owls rely on a diet that is 90 percent rodent, and in spite of the abundance of rodents, were disappearing in many parts of the United States and Canada due to the loss of one of their favorite nesting sites — barns. Barns have been disappearing across the continent due to changes in agriculture.

“In many states, barn owls are considered a ‘threatened species’ and although it is difficult to quantify, the barn owl project has succeeded in reducing rodenticide usage in the EAA, preserving the environment, while also saving growers money, and encouraging the survival of the species,” adds Raid.

While sugarcane, rice and vegetable growers in the EAA participate in the project and reap the benefits of barn owls as a natural form of rodent control, there are other beneficiaries, like the  South Florida Water Management District.  They benefit by having less rodents burrowing through their dikes and chewing electrical wires on monitoring equipment.

“Today, our barn owl populations have definitely improved. We now have probably close to one thousand nesting pairs in the EAA, most nesting in boxes,” said Raid. By comparison, some Midwest states are excited that wildlife surveys have revealed several dozen nesting pairs of barn owls.

An additional beneficiary is the general public. The barn owl project represents one of the university’s best outreach/education projects. It is unique in introducing youth and the public to both agriculture and wildlife at the same time, said Raid.

“My hope is that people can fully appreciate these marvelous birds, how beneficial and intelligent they are,  and how well-adapted they are as rodent predators,” he said. “The project has been and continues to be a great way to bring together people who are often at odds, environmentalists and agriculture producers.  It is also a great mechanism for getting youth involved in a worthwhile project for the environment.”

Differentiating the value of feeder cattle