Home / Kansas / Bank Officer and small beef producer has unique perspective on management of checkoff dollars
A new user experience is coming! We'll be asking you to login to your Morning Ag Clips account March 1st to access these new features.
We can't wait to share them with you! Read more here. 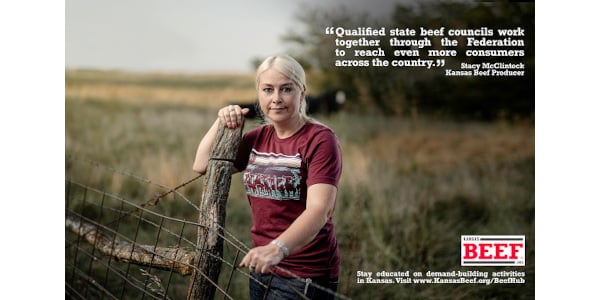 "State beef councils work together through the Federation to reach even more consumers across the county," says Stacy McClintock, a Kansas beef producer and KBC board member. (Courtesy of Kansas Beef Council)

TOPEKA, Kan. — Stacy McClintock did not always picture a career in banking, but she was positive cattle would be a part of her life. It was a happy coincidence that her life’s work in banking would naturally parallel her role in the beef industry as a member of the Federation of State Beef Councils.

“CBB is the Beef Checkoff,” McClintock explained. States receive representation based on their population of cattle. Kansas, ranked second in the nation, has six representatives on CBB. KBC and CBB each get 50 cents of each Kansas Checkoff dollar, so coordination between the state and national organizations is critical to ensure producer dollars are spent effectively. “When the state and national levels work together, we can get more done and that is good for everyone,” she said.

As a small beef producer, McClintock is a passionate representative at the national level. “We all pay a dollar into the Checkoff and the Checkoff is very complex,” she said. “It’s important to see the big picture and how much the Checkoff truly does. As individual producers, we don’t have the resources to create imports and exports and offer official comments that delve into the dietary guidelines. We don’t put up billboards, run social media campaigns, and give out beef recipes and meal inspirations. We can’t do all of those things because we are doing chores and taking care of cows.” Most surprisingly, McClintock stated that Checkoff funds supported initiatives that addressed more than 100,000 pieces of misinformation about beef in the media last year. “That is astronomical to me. Who wouldn’t pay a dollar just for that? It’s incredible.”

One of the most intriguing parts of the Beef Checkoff for McClintock was its role in dietary guidelines. McClintock’s daughter is diabetic so naturally, nutrition is an important part of their lives. While serving on the Checkoff, a dietitian requested funds to attend a meeting overseas to discuss research showing beef causing cancer. “It’s expensive to send someone overseas and we are very careful about how funds are used,” she said. They agreed to fund her trip. After the meeting, the dietitian was on at least six national news stations successfully disputing the research and pointing out its shortfalls. “What would have happened if we had not sent her?” McClintock asked, confident the decision to fund that trip was money well-spent.

McClintock enjoys the opportunity to participate in the Beef Checkoff process with leaders from around the nation, but she is most proud of the beef industry on her daily drive home to Soldier, KS, past fields and pastures filled with families teaching children and grandchildren. McClintock’s passion and leadership, as a producer, is the example we need to inspire the next generation to lead and protect the future of our industry.