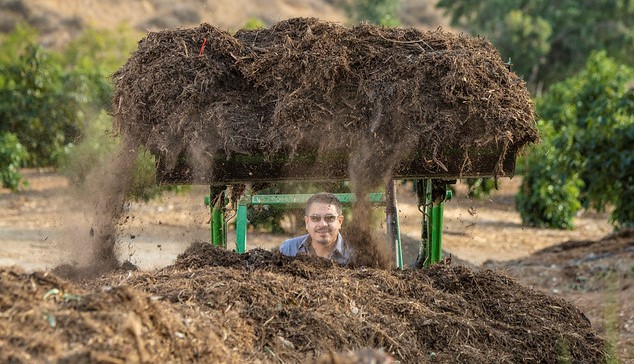 Over the past ten to twenty years we have had an outbreak of mulch-volcanoes. They seem to erupt at the base of landscape trees, particularly young ones, and the results aren’t pretty. (U.S. Department of Agriculture, Public Domain)

CANTON, N.Y. — When you think about it, landscape trees have a rough life Rooted in one spot day in and day out, year after year, they suffer from – well, boredom, I imagine. They may need to contend with helpful watering by territorial dogs, materials-testing by energetic kids, or issues such as restricted root area, drought stress, competition from turf grasses, reflected heat from pavement and buildings, deicing salt in the soil – that sort of thing.

However, in recent years there has been an epidemic of seismic proportions which threatens the well-being of our beloved shade trees: volcanoes. That’s right, over the past ten to twenty years we have had an outbreak of mulch-volcanoes. They seem to erupt at the base of landscape trees, particularly young ones, and the results aren’t pretty.

Geologists and botanists have been hard at work trying to account for this phenomenon. Until a cure can be found, though, the public is urged to watch for rogue volcanoes in their area. Please be on the lookout for sudden eruptions of much around the bases of trees. Mulch volcanoes can sprout overnight, especially on commercial and institutional properties.

Banking mulch around the trunk of a tree can have severe detrimental health effects. For the tree, just to be clear. One issue is that insect pests are chicken. Like vandals and Internet trolls, they are afraid to do their dirty work if they think anyone can see them. No, they like it dark and damp, just like the atmosphere under a mulch pile, or in the case of trolls, in Mom’s basement. Wood-borers and bark beetles love a mulch volcano because it gives them free access to the tree’s trunk.

Who doesn’t like a cute rodent? OK, some of us probably don’t. Trees are not fond of rodents either. Mice, meadow voles and pine voles all enjoy the taste of tree bark. The trouble is that eating bark takes them a long time, during which they can be vulnerable to predators. But under a mulch volcano, leisurely lunches are on.

Tree roots need oxygen. This may seem obvious – of course they do, and they get oxygen through their veins, right? Well, no. Trees do have vascular systems and they also make oxygen via photosynthesis, but they lack something akin to hemoglobin to transport oxygen to all their parts. Turns out that roots get their oxygen through the soil surface. Anything which obstructs access to the surface will smother roots. And trees are not any better at holding their breath than we are.

Another problem is adaptation. To a great extent, trees are “self-optimizing.” This means they adapt and respond to changes in their environment. But mulch volcanoes are a wrench in the machine.

When tree trunks get buried by a mulch volcano, which limits oxygen to their natural roots, trees begin making adaptive (adventitious) roots to compensate. Fine rootlets will sprout from the trunk in response to being smothered by wood chips. However, over time the mulch volcano will break down and subside, and as a result, those tender roots will dry out and die, which stresses the tree.

Finally, there is the issue of water. Transplanted trees may need additional water for several years. The rule is one year of supplemental watering for each inch of trunk diameter. Mulch volcanoes act like a thatched roof, shedding water very effectively. For a mature tree that is not as big a problem, but a young tree may have all or nearly all its roots under that mountain of mulch, (not) nice and dry.

Maintaining two to four inches of mulch around a tree – twice its branch length is ideal – is beneficial, as long as the mulch does NOT contact the trunk. Please help stamp out mulch volcanoes in your lifetime! You won’t even burn your foot.

Master Gardener training to be offered virtually this spring
January 6, 2021

They need to chill: Tips for turning seeds into trees
January 5, 2021