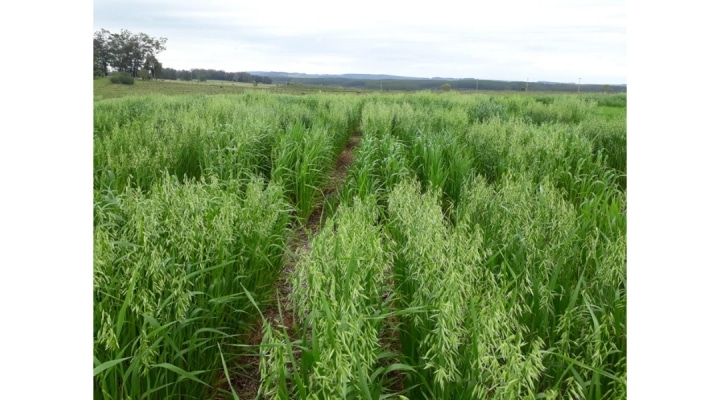 In a new study, researchers showed that the fiber content in oats can vary with the size of oat kernels. The study determined the genetic profiles of 400 varieties of oat. Pictured is a field of oats at one of the study sites. (Marcelo Pacheco)

MADISON, Wis. — Oats are full of essential nutrients and are a great source of energy. They also provide dietary fiber, a key part of healthy, balanced diets.

In a new study, researchers showed that the fiber content in oats can vary with the size of oat kernels. They recently published their research in Crop Science Journal, a publication of the Crop Science Society of America.

The kernel includes the edible seed and husk (outer shell) of the oat plant. That’s where most of the nutrients are concentrated.

According to the study, those two criteria – kernel size and fiber content in oats – appear to be at odds with each other. The researchers found that as oat kernel size increases, fiber content often decreases.

The study was led by Marcelo Pacheco, a researcher at the Federal University of Rio Grande do Sul in Brazil.

Pacheco and colleagues focused on one major component of oat fiber called beta-glucan. They found that selecting during the breeding process for wider and thicker kernels lowered the amount of beta-glucan in those kernels.

Beta-glucans are soluble fibers. They have a host of health benefits. These include lowering total and LDL cholesterol levels.

“Oat breeding programs that aim to maintain minimum levels of beta-glucan for nutrition and minimum kernel widths for milling will need to screen for both traits,” wrote the study authors. “Otherwise, indirect selection will lead to unfavorable results.”

The researchers worked with more than 400 varieties of oats for the study. They wanted to know how different growing environments would affect oat kernel size and beta-glucan levels.

To test how environmental factors affect kernel size, the study was carried out in two different locations. The two oat crops were also grown in experimental fields during 2017 and 2018.

The study showed that “kernel width and kernel thickness were…correlated with beta-glucan content, regardless of environment,” the authors wrote. “This suggests that the selection of wider and thicker kernels could inadvertently decrease beta-glucan content in oats.”

They wanted to know which parts of oat DNA controlled kernel size. To do that, they used a technique called a genome-wide association study.

Analysis of these results yielded four different regions of the oat genome that regulate kernel size. This gives future oat breeding programs information on where to look on the genomes of potential crossbreeding projects.

“Our results provide valuable information for a better understanding of the…relationship between kernel shape and beta-glucan content in oats,” the authors wrote.

In the future, Pacheco and colleagues will try to identify parts of the oat genome that control both kernel size and beta-glucan levels.

USDA seeks feedback from producers about 2022 crops, stocks, inventories, and values
May 16, 2022